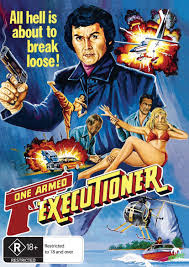 Ramon Ortega (Guerrero) is an Interpol agent living in the Philippines. His professional and personal relationships have never been better, including his marriage to his hot blonde American wife Ann (Kay) - until one day tragedy strikes. A gang of super-evil baddies kill Ann, destroy his life, and, to add insult to injury, cut off one of his arms. Naturally, Ramon then spirals into alcoholism and depression. After threatening to kill all his assailants, his boss Wo-Chen (who can only be described as an Asian Tommy Lee Jones) states “you’re not ready” (and insensitively warning “hands off”), and puts him on a grueling training regimen. Now back in fighting shape, Ramon sets off to make good on his promise of revenge. But will he complete his mission what with his handicap of having, you know, only one arm? Find out today!

In our world, at least, The One Armed Executioner is a video-store classic. Producer/co-writer/director Suarez had previously lit up drive-in screens with gems like Cleopatra Wong (1978), but now he’s firmly in the VHS era. He would follow that up with American Commandos (1986) to further reinforce that. TOAE was originally released on VHS in the U.S. on the great Paragon label. As great as that was, it’s nice to have the Dark Sky DVD which offers a cleaned-up, widescreen version, and it’s paired up with the aforementioned Cleopatra Wong as a double-feature.

The tone of TOAE is much darker than the sprightly Wong, as befits the revenge movie style. Seeing as how revenge movies are among our personal favorite genres, this can proudly sit with the others in our revenge collections.

The movie gets off to a bang, features plenty of fighting, shooting, and blow-ups, and, of course, a classic, extended training sequence (in the woods, naturally). The music by Gene Kauer is killer and keeps you engaged. Even some guard towers get blown up, and this isn’t even an Exploding Hut movie. As the baddies are attempting to flee in their speedboat towards the end of the movie, we see there’s a swastika emblazoned on it.

Apropos of nothing, as if the baddies weren’t bad enough, we’re now clearly shown they have a Nazi Boat. What follows is a helicopter-boat chase (Nazi Boat, specifically) - did you expect to chase it with another boat? But this isn’t your average heli. It also has a large logo emblazoned on it, but it’s not a swastika. Oh no, these are the good guys. Naturally, their logo reads “The Small Fry”. It looks like the sign for a restaurant. Presumably all restaurants in the Philippines have their own attack helicopters. At least that’s what we believe based on what we’ve seen of their country.

It truly was a different time, so do check out the Dark Sky DVD. You get two sides of Suarez: the fun side and the dark side. And you can hark back to the days of hunting down revenge movies on VHS, so it’s a win-win.

Didn't this come on El Rey Network recently? Swear I saw it on the digital tv guide

Wish i knew! We have Comcast here in CT, we don't get that channel.