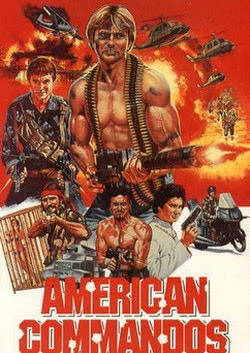 AKA: Back To Hell

American Commandos is an interesting hybrid of two favorite B-action genres: the revenge movie and the back-to-Vietnam tale (with a bit of the old "ragtag team" thrown in for good measure).

Chris Mitchum plays Dean Mitchell (I know, quite a stretch), the one gas station attendant you don't wanna mess with. He's a taciturn Vietnam vet who doesn't say very much. When some stupid baddies DO decide to mess with him, they end up in a world of hurt. They try robbing his beloved gas station, and then they go after his family. Big mistake. Chandler, Speck and Buck (the evildoers' names) live to regret the day they went after him. So ends the Death Wish (1974) section of the film. 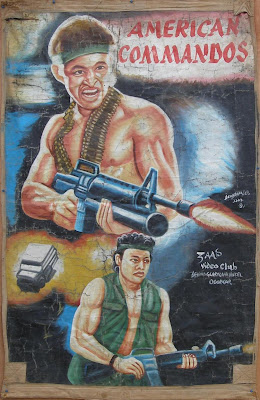 When "The Man" also known as Brady (Ken Metcalfe) who works for the government, gets wise to Mitchell's technically-unlawful revenge methods, he leverages that against him so that he can send Mitchell to the "Golden Triangle" to destroy a drug operation there. He literally asks them to "blow it up". Radical! ("You don't have a license to kill anymore" Brady tells Mitchell. Mitchell disagrees.) So he teams up with his old buddies Kelly (Law), Brutus (Robert Marius), Somsak (Guerrero of the Richard Norton classics Kick Fighter (1987) and Cross Fire (1988)) and Creeper (Williams). They have an awesome tank, much like the one in Bulletproof (1988) (But in this movie no one gets called a "Butthorn" - make of that what you will) that has missile launchers, hidden guns, cool armor and a space for a motorbike to bust out! Will this team survive not just the countless amounts of people shooting at them, but all the twists and turns in the plot as well?

We love Chris Mitchum. He closely resembles his father and also shares his trait of being a man of few words. It's a good antidote to the overly-verbose post-Tarantino movies of today. The character of Creeper dresses in sleeveless beer shirts (Olympia and Budweiser) or no shirt at all. He also has some cool slang ("Why you payin' cool green for a snap job?"). Speaking of cool clothes, John Philip Law - another one we always love seeing - has an extremely awesome T-shirt that simply says "AMERICA RULES!" I guess that's for when he goes to foreign countries so the baddies know who to shoot at. 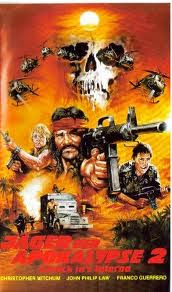 So while the movie is an entertaining time, with the revenge movie section, the Golden Triangle section where they shoot millions of thugs and attempt to dismantle the heroin operation (all this when they're not getting numerous "massages" at the local whorehouse run by one of the heroes), there is one scene in particular that stands out - the one that is REPEATED! Yes, probably by accident, about an hour into the movie we see the same scene twice. Literally. This editing-room mistake makes for some laughs and extends the running time quite unnecessarily. It's really weird.

So if you want some kind of cross between Death Wish and Codename: Wildgeese (1984) starring some familiar faces, you'll surely like American Commandos.

Nice review, I picked this one up on DVD from a local shop which surprised me. Another in the to-watch queue!

This is prime rudeness at its best. When they made films like this were they laughing as they did so? How could anyone associated with it take it seriously? I mean I was cracking up as Mitchum's wife was raped and his son killed. What I found odd was his son was the same age as when he adopted him, so had no time passed between the period he convinced his wife to marry him while he adopted his unfortunate kid in Saigon? Regardless this is outstanding cinema and the part where an innocent bystander is run over during a car chase at the beginning sealed it for me. I liked the revenge element better than the Golden Triangle nonsense and the constant claims of Mitchum that 'we're all victims' veered on the edge of lame social commentary. That is a minor aside for this feast of glorious ineptitude in the finest traditions.

This was a completely ridiculous movie. We loved the repeated footage scene. Haha.

Sounds like it would make a fun double feature with the likes of McBain or Let's Get Harry. :)