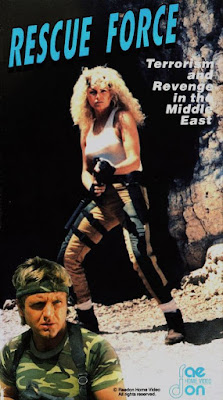 
It’s “no budget, no logic, no coherence, no problem” as the wild and wacky antics of Rescue Force unfold before your disbelieving eyes.  Sometimes movies come along that seem like they’re from an alternate universe. Or if you found an alien that had never seen a movie before, handed them a camera and instructed them to create a film. Well, we don’t know what state of reality director Charles Nizet comes from, but it seems he’s not in touch with the way actual humans actually talk, behave, or exist. God bless him for that. Sadly Nizet passed away in 2003, but not before leaving behind a clutch of demented classics, such as The Ravager (1970), the movie that Image Entertainment refused to release on their label, so Something Weird put out as a DVD-R. Rescue Force is Nizet’s last directorial work, a fitting epitaph to a one-of-a-kind career.

Real American Hero Bo Gritz (not to be confused with Bo Hopkins or Fritz Matthews) is Lt. Col. Steel, a man in charge of coordinating a rescue operation to save the American ambassador to Israel and his daughter who have been kidnapped by Palestinian Islamic extremist terrorists and held captive in a cave in Syria. The more things change...Gritz, er, I mean STEEL doesn’t like this so he gets his best agents on it, a middle-aged Frenchman named Striker and some babes named Kiki (Smith) and Angel (Thompson). When people aren’t talking on the phone or into walkie-talkies (always covering their mouths so dialogue can be looped in later), people are getting shot and blown up in the desert. Eventually Richard Harrison (credited solely as “Chief CIA Agent”) shows up to participate in the chaos.

Rescue Force is filled with low-budget wonderment: It’s shot on ancient film stock that makes it look like it was shot in 1977 and not 1989, there are abrupt cuts, jerky zoom-ins, and characters stand stock-still while waiting for the camera to roll so they can speak their lines.

And there are some immortal line-readings here, maybe some of the best ever. It sounds like a bunch of foreigners reading English phonetically for the first time in their lives. Thankfully, it’s all part of the bewildering fun. The production design features various guns affixed to the wall in a random fashion. Easy access, presumably.

As if all this wasn’t nutty enough, Law & Order-style subtitles appear letting us know the time and location of where we are, as if that mattered one whit. Adding insult to injury, all this information is on the screen in a split second, not enough time to read the actual information! Are we supposed to be taking all this in subliminally? But from what we were able to glimpse, here are our four favorites: “Terrorist and son”, “Terrorists Yacht”, “Paris terrorists hide-out” and “Kiki and Angel’s favorite restaurant”. Good to know. Speaking of Kiki and Angel, some of the girls-with-guns scenes in the desert were reminiscent of Hell Squad (1986), but by comparison, Hell Squad is the height of professionalism.

Yes, there is a lot of silly shooting and blow-ups, the bombs are mainly dirt rising to the sky, and you could accuse it all of being amateurish, but most of the end credits consist of the weaponry used and where it came from. It has to be the longest credit roll for guns and ammo of all time. How else will our heroes fight terrorists who are alternately blonde women or John Oates lookalikes?

But Bo Gritz did his own flying. So there’s that. During the scene where Gritz explains - in meticulous detail - the rescue mission, it’s one long shot of his gut and his hands as he presides over a scale model that looks like a less-interesting copy of board game Fireball Island. You can’t do anything remotely like this today. That’s why gems like this should be treasured. We’re not likely to see their kind ever again.

Released on VHS label Rae Don, Rescue Force only barely fits the definition of what a movie is, and makes no freaking sense whatsoever, and we wouldn’t have it any other way.

Also check out a write-up from our buddies, Bleeding Skull!