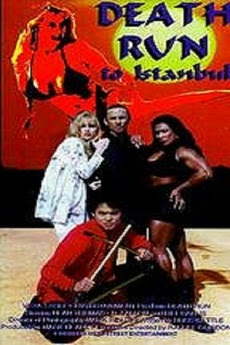 The most we were able to discern is that a guy named Gary Yaeger (Thomas) once was a kickboxer, but fell on hard times and became a heroin addict. He owes a ton of money to a gangster baddie named Alonzo (Ballis, who also appeared in the classic Geteven in 1993). Alonzo realizes he’s basically homeless and has no money to pay his drug debts, so he offers him a deal: Get a cache of drugs to Istanbul and he’ll wipe out the debt. Seems simple enough.

You’ve gotta hand it to Vista Street Entertainment. They’re perfectly willing to release what are essentially family home movies to the wider market. Found on the “Women Who Kick Butt” DVD collection, Death Run To Istanbul, which technically qualifies as a movie, can now have a life into the foreseeable future.

It seems to have been shot with a standard, consumer-issue camcorder, and without adding any after-market sound equipment. This is another one of those “alien” movies, in the sense that it appears that writer/director Rachel Gordon had decided to make her own movie without ever having seen one before. She likely just landed from an alien world in 1993 and decided to try her hand at filmmaking, only having heard of things called “movies” on her home planet.

That’s why some of Death Run To Istanbul is fascinating - seeing people speak and behave in odd ways, and watch endless scenes of practicing, exercising and even coffee-making, just happens to be strangely interesting.

And at only 72 minutes (though it feels longer), it doesn’t tax your time too much. Besides, it’s still better than green-screen, CGI garbage of today, and it doesn’t have that annoying blue-green tint so many modern movies have. There are some trained Martial Artists here, unlike so many other movies (handy tip: if you see an unintelligible Asian man wearing a vest and no shirt, run away).

The whole thing starts with a montage of things we’re about to see, and ends with another montage of things we’ve just seen. Some of these things include a mob boss who looks like John Waters (and is about as threatening and intimidating as John Waters), a hulking female brute who appears to be a transsexual, and a band called The Daze. We’re not sure which is scarier.

At one point, the end credits list The Daze as “The Band”. Perhaps this is what they were singing about when they wrote “The Weight”. Whoever typed the credits also listed someone as “Fight Coor”. Either the budget (?) ran out, or the fight scenes were planned out by an empty beer can.

We’ve tried to be as fair as we could with Death Run To Istanbul (which, misleadingly, was shot entirely in the L.A. area but made a stab at sounding international), and a mean person could point out that pretty much every aspect of it, from every technical standpoint to anything else, isn’t up to par.

However, it acted as sort of a “demo tape” for Ms. Gordon and some of the other people involved, launching their careers. But the real trick here is this: Don’t compare this to any other movies you’ve seen. If you do that, you’ll think it’s bad. Just treat it as its own thing - from the parallel universe of SOV’s that Bleedingskull.com is always celebrating. Don’t expect quality; expect a strange, amateurish project, and you MIGHT find something worthy of your 72 minutes.  But don’t get your hopes up.