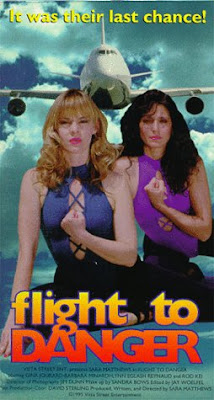 Marcy and Dylan (co-directors/co-writers/co-producers/co-stars Matthews and Jourard, respectively) are members of an all-female Martial Arts class. The Sensei is a man named Robn (Robn Meeks) - yes, ROBN. The guy is so awesome, he doesn’t need to use the letter I. He just lets his ponytail do the talking. The girls even volunteer their time at the local women’s shelter, where they combat issues such as “detached depression”. Maybe it’s their good-heartedness, but they win a competition to go to a fighting tournament  in Paris. (Because the movie is so low-budget, we never actually see Paris, but they do talk about their experiences there, including how Marcy met Bill “Superfoot” Wallace).

Then some gangsters want the time-honored disc (or is it a box? or maybe a box with a disc in it? Not really sure). So the gals snap into action and fight the gangsters and baddies that have been harassing them, and all of the 3rd Street Promenade. Why did they ever go on a FLIGHT TO DANGER in the first place?

Well, if you’ve read our reviews for the other Vista Street Entertainment movies included on the “Women Who Kick Butt” DVD collection, you’ll know what to expect here - shot on a camcorder, zero budget, amateurish, even childish. But this one has funny dubbing and editing tricks, so it may have a technical edge on its lowly brethren. Said editing is by one Jay Woelfel, the guy who directed one of the worst movies we’ve ever seen, Iron Thunder (1998), by the by. Flight To Danger is better than that turkey, so let’s keep things in perspective here.

That being said, we demand a list of video stores in the 90’s that a. carried this movie, b. had customers who rented it, and c. anybody who truly liked it and didn’t notice that it looks like a middle-school video production project. We just want to get an idea of the scope of this movie’s reach. Or any other VSE titles for that matter. They’re not included in many reference sources and appeared to slide under the radar, yet they must have been in some mom-and-pop video shops. But where...and...WHO?

Because it was directed by not just one woman but TWO women, there is a classic “trying on different outfits” montage, a dance party in an art gallery (evidently the XX/O Gallery in L.A.), and the ultimate Lothario for the Ladies is present, a man named Michael Jacques. When he’s not smothering you with his luscious locks (his hair is legitimately more lustrous and better taken-care of than many of the women in Mr. Robn’s class), he is wooing you with the gentle tones of his acoustic guitar. While naked, of course. Don’t want to forget that. (“Just a guitar and a smile”, he sickeningly states). Also a woman who was getting down and/or funky at the art gallery dance party is a dead ringer for former Secretary of State Condoleezza Rice.

Just one more note about the man with no “I’s” (heh heh), Mr. Robn. He answers the phone, “Dojo?” - no specific name given. This reminds us of noted dud Deadly Reckoning (1998), where an employee of a bookstore answers the phone “Bookstore?” - do no establishments in L.A. have actual names? Robn also had a bit part in American Ninja 3 (1989) as “Black Ninja Fighter”. So he’s had a nice life. Also an actor named Rod Kei plays a baddie named Flavio. Of course he does. Mr. Kei had previously appeared in Ring of Fire (1991) and Full Impact (1993), so he actually had a decent action pedigree before downgrading to this. A guy in the movie named Greg looks like Matthias Hues, but, upon closer inspection, is not Matthias Hues.

While the movie was released in 1995, during one scene we pass a movie marquee (which we usually take note of) and it’s playing this lineup: Born Yesterday, The Adventures of Huck Finn, and the immortal classic Cop and a Half (all 1993). It’s also playing Unforgiven (1992), but that was such a hit it was still in theaters. Near the theater is a restaurant named Tacos Tacos Cafe. Can you think of a better way to spend a nice afternoon in 1993 than watching Cop and a Half and then going to the Tacos Tacos Cafe? Because I sure can’t.

Flight To Danger ends with a freeze frame, so that gains it extra points in our book, but we wish there was a lot more professionalism here. Sometimes reaching out to the far corners of the action movie world pays off, and sometimes there are frustrating disappointments. Sadly, this was the latter for us. Sometimes the camcorder should stay in the case.

I can honestly say I liked this film despite it's weak production qualities, also I've talked to Woelfel before in email and he's a pretty cool guy(i'd recommend you check out his film Trancers 6 if you haven't yet).

The movie does have some endearing qualities and we're glad Woelfel is a nice guy. But our opinion about Iron Thunder unchanged.