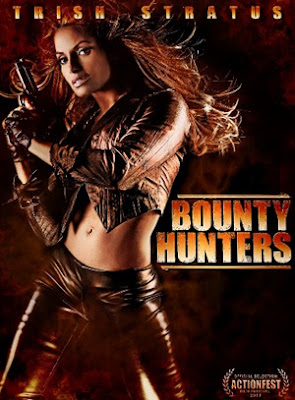 Ridley (Zupancic), Chase (Phillips), and Jules (Stratus) are a team of Toronto-based bounty hunters. Bounty Huntering apparently isn’t paying the bills enough for Jules, who has a young daughter, so she has a side job as a strip club waitress part-time. A potential opportunity arises for our trio of ‘tracers when, after picking up a bad guy for a $100,000 bounty, mob boss Hal Lambino (Rafla) intervenes and offers them a million dollars if they turn the guy over to him, so he won’t spill the beans in court. Wary of this criminal proposition, the Bounty Hunters refuse, and now they have to fight off many baddies in the Canadian underworld.

This includes some disgruntled Asian massage parlor ladies, including one especially tough chick, Ruby (Lui), who has a knock-down, drag-out fight with Jules. Will justice prevail in the great white north? Will the maple leaf of freedom fly proudly once again? Will it be, as she has so often claimed, Stratusfaction guaranteed?....Ya HOSER!

While it shouldn’t be confused with the Michael Dudikoff outings Bounty Hunters (1996) and Bounty Hunters 2: Hardball (1997), THIS Bounty Hunters does share the silly, humorous, tongue-in-cheek vibe of those 90’s offerings. For those keeping track, there’s also the Robert Ginty vehicle Bounty Hunter (1990) and of course the Lorenzo Lamas/Matthias Hues team-up Bounty Tracker (1993). Seeing as how this movie is called Bail Enforcers in Canada, and there are so many other similarly-titled movies in the U.S., why change it at all? Is “Bail Enforcers” SO different from “Bounty Hunters”? Enough to make any kind of difference? Besides, this movie is so Canadian, we’re surprised it wasn’t originally called “Boonty Hunters, Eh?” - we kid our neighbors to the north, but at least they’re not trying to hide the fact that they’re Canadian, like so many others. These filmmakers are true patriots, letting the Canadianness of their movie really shine through, like maple syrup in the sun. 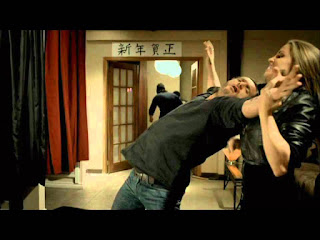 But, straight to the point, if there was no Trish Stratus, there’d be no movie. She brightens most of the scenes she’s in, but at one point in the movie she “goes to the hospital” (was she doing WWE stuff at the same time?) and isn’t seen for a while, and the movie suffers terribly. Bounty Hunters gets off to a great start, but at the 35 minute mark it loses steam and doesn’t recover. The Tony Soprano-like Lambino character goes off on this long monologue and it puts the brakes on the movie. THAT’s when we sink down and realize, hey, this whole thing is low-budget, junky, and cheap-feeling.

The dialogue goes from ridiculous to ridiculously stupid, and it all goes from “entertaining” to “meh....” What the filmmakers absolutely should have done is kept their foot on the gas, and kept the absurd situations coming fast and furious, not seemingly change the vibe. 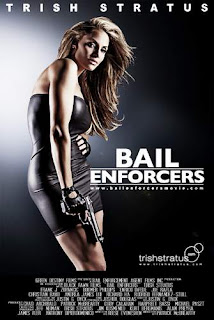 At 79 minutes, you think you can’t lose, but as we always say, beware the short movies. They’re that way for a reason - because they FEEL much longer. Even the Trish Stratus fight scenes start to become repetitive and boring after a while, and those are the movie highlights! If a 79 minute movie has FILLER, beware.

It tries to be sordid, with scenes in strip clubs and “massage parlors”, but Canada is so clean it never comes off as gritty. The Bail Enforcement Agents have jackets that say “BEA” on the back (is this a real thing in Canada or made up for the movie?) which seem like a little old lady’s personal protection force. Or Bea Arthur is really running the show. She should have done action movies. She could've have been the Trish Stratus of her day.

The first third or so of Bounty Hunters is stupidly, reasonably entertaining, but then falls off fast. Only fans with their heads in the StratusPhere are likely to truly appreciate the wanton silliness herein.

Gotta disagree here, I really enjoyed this one.

Hello, I'm trying to find the name of an action film I saw many years ago, maybe you can help me. I will try to put as many details as possible. I saw it in mid/late 90s, it's probably from the 90s. I remember this one scene at a bar where the protagonist use to hang around. The person he is helping (who may be a woman, but I don't remember) talks to the bartender. He has some kind of physical disability (on the head, I'm almost sure), and the person asks him about it. He says that the protagonist is responsible for that (saying something along the lines "he wasn't always this nice"). The protagonist, I think, was some sort of reluctant do-gooder. This one's been bugging me for decades, any help would be immensely appreciated.

Venom: Trish was the best part of this movie. Everything else was slop.

Bernardo: Do you remember if it was a big-budget or a low-budget, that could help figure it out.

Ty: I think it was a low-budget movie, maybe even a TV movie or direct-to-video one.

Hmm, we will try to figure it out. Drop by anytime if you remember more info.