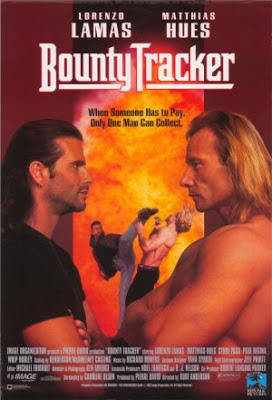 Johnny Damone (Lamas), not to be confused with Johnny Ramone, is a Boston-based Bounty Tracker who always gets his man. When his brother Paul (Paul Regina) has to be sequestered so he can testify against Bernie Madoff-like white collar criminal Sarazin (Glazer), a team of ruthless assassins, who have no problem killing anyone in their path, led by the super-evil Erik Gauss (Hues), tries to find him and kill him. Johnny travels to L.A. to take down Gauss, his hardest collar yet. Helping him on his journey are a trio of homies from the ‘hood who also want Gauss for their own reasons. Inevitably, it leads to the final showdown between Johnny and his boys, and Gauss and his gang. Who will prevail?

Bounty Tracker is a total winner. It delivers everything you want in a DTV movie from this time and place. It has all the traits that make a movie like this successful. It’s always pleasing when filmmakers actually “get it” because so many out there do not. This movie is pure 90’s-action-movie fun and if you’re a fan of that (and why wouldn’t you be?), there is a lot to love about Bounty Tracker.

This truly is Lorenzo Lamas at his absolute best. As the movie kicks off (no pun intended), we see his range as he plays a faux-upper-crust, bowtied nerd. Of course he still has his trademark beard stubble and ponytail. Lamas has a lot of charm, and, in true action-movie style, is always ready with a glib remark. Naturally, Johnny Damone is your classic “ex-Marine, ex-cop, with a black belt in Aikido”, who now is a Bounty Tracker, not to be confused with a Bounty Hunter, or even a “Skip Tracer”. It’s confusing but Reno Raines is a Bounty Hunter. Johnny Damone is a Bounty Tracker. It’s hard to keep it all straight. His superiors even call him a “Karate Cowboy”, whatever that means, but it might make a great movie in its own right. His fight scenes are highly enjoyable, like the rest of this movie. 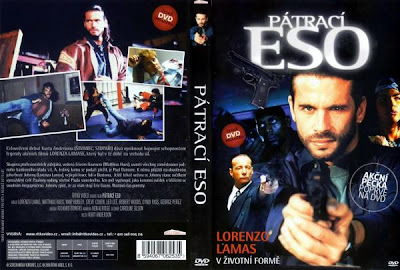 Fellow fan favorite Matthias Hues once again plays the villain. To see Lamas and Hues face off is truly a DTV dream come true. It’s a good, solid role for Hues, who so often is relegated to the background. Here, along with Lamas, he gets his name top-billed above the title. Ah, the golden age. Can you believe there was a time when a top-billed Matthias Hues was an actual THING? It seems hard to believe now in our cynical era. But here’s the proof.  His female counterpart in the movie, Jewels, is played by Cyndi Pass, who also appeared in Deadly Reckoning (1998), as well as Mission of Justice (1992), which was produced by Bounty Tracker director Kurt Anderson. Anderson also directed Martial Law II (1992) and produced the first Martial Law (1991). So you see the general spirit of what’s going on here.

We actually liked the homies that Damone teams up with. Sure, many punks and/or homies in these movies can be unnecessary or annoying, just look at Esteban Powell from Hitman’s Run (1999). But, the thing is, you have to take these things on a homie-by-homie basis. You can’t just throw the homie out with the bathwater. You have to take the proceedings in the spirit of the time. They just want to turn their lives around and help out Damone. You can’t fault them for that. Even Damone can use a little help against someone as evil as Erik Gauss. Plus you can tell he’s evil because his name is Erik Gauss.

Bounty Tracker is never boring and hits all the right notes. It’s a pleasure to watch. There should be more like this.

Also check out a review by DTVC!