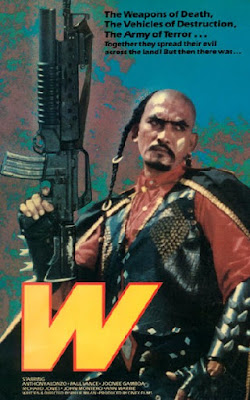 A frightening new gang is running wild on the streets of Manila and terrorizing the citizens. They are all bald and wear bizarre leather costumes. Imagine a cross between Buddhist monks and Zipperface-style leather freaks, and you’re just about there. A good cop named W2 (Alonzo) gets into a scuffle with the gang and...wait.

The guy’s name is W2. W2. There’s also a guy in the movie named R2. In real life he’s played by Bing Davao, so we don’t know which is cooler. So the good guys are like tax forms meet Star Wars. When W2 shoots the evil gang leader’s brother, said leader, Nosfero (Montero) wants him dead, and that seriously puts a crimp in W2’s new marriage with W2’s Wife (Gutierrez) (her name in the movie is credited solely as “W2’s Wife” - but then again, if you were W2’s wife, isn’t that all you’d want to be known as?).

After Maj. Medina (Gamboa) takes away W2’s badge and gun, he goes on a solo mission to stop Nosfero and the evil gang, which he discovers is a cult. When he finds out they kidnapped a bunch of schoolchildren, and are about to enter into a million-dollar opium-smuggling deal, he really snaps into action. Find out just how he does it as W2...IS WAR.

God bless the Philippines. They provided us with so much cinematic entertainment in the 70’s and 80’s, and this is one of their more off-kilter entries. It’s a bit like Cobra Thunderbolt (1984) (which is Thai, but who’s counting?) meets Search for Vengeance (1984).

Much like how the centerpiece of Cobra Thunderbolt was our beloved Lt. Molly and her shooting a machine gun at the baddies while riding a jetpack, here the main focus is clearly the gang/cult and their wonderful attire. It’s like a Mad Max situation, but the movie gives no indication it takes place in the future. Is the Philippine economy really doing that bad? It can’t be, because their film industry seemed to be doing gangbusters then...but that didn’t stop Nosfero and the gang from being the “biggest pot producer in Asia” to graduating to lucrative opium deals. They sure got a ton of extras to be in the gang, and we can see the lure. Not the drugs -- the outfits, of course. 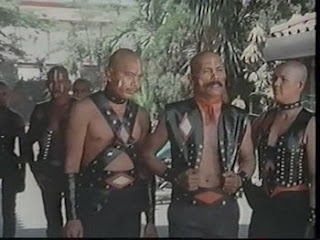 It’s even explained that people follow Nosfero because he has strong powers of hypnotism. And all this time we thought it was his fashion-forward sideways ponytail. Also, the higher-ups in the organization get cool single-name appellations like Pendragon and Voltar. In order to beat them, W2 slaps some metal siding on his car - and himself, becoming, quite literally, a knight in shining armor - and rolls into battle.

The final 30 minutes or so of the movie is one extended battle sequence/climax. It goes from a strange curio with wacky dubbing and odd people in the first half to an out-and-out exploding hutter, with blow-ups, guard tower falls, and the works in the latter half. It all has a funky, 70’s-style score from Ernani Cuenco, and director Milan is handy with wide-angle lens effects. He also directed the hard-to-find and awesomely-named Ultimax Force (1987).

Released on the great Paragon label during the VHS era, it has also, interestingly enough, received a DVD release on the Telavista label. Both U.S. formats used the original title, simply “W”, not to be confused with the Twiggy movie of the same name. You could walk into a video store in the mid-80’s and find two movies called W, one on Paragon and the other on Lightning. It truly was an amazing time. We were really spoiled back then. But much like W2, W continues to survive.