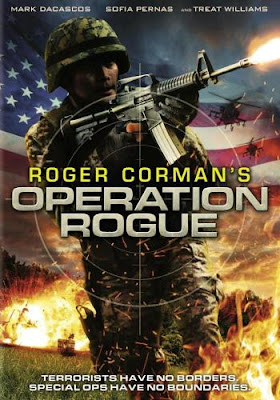 In the jungles of the Philippines, General Hank Wallace (Treat) and Captain Max Randall (Dacascos) are fighting terrorists. The baddies finally go too far when they kidnap Jenna Wallace (Pernas), the General’s daughter and Max’s love interest. Wallace tells Max and his team to find her at any cost - but it just may be their lives. Thankfully, Jenna is a “former Marine” (despite the fact that she looks far too young to be a former anything) so she can handle herself well under fire.

Presumably this would be the case if Treat Williams was your father. In the immortal words of that movie we haven’t seen as of this writing, will our heroes GET THE TERRORISTS? Or will the forces of evil prevail? Find out today...

So, who better to fight these guys than fan favorites Treat Williams and Mark Dacascos? Speaking of the aforementioned old days, the past is clearly an inspiration to the filmmakers here, as the structure of this movie is very much like the Cirio Santiago-directed jungle epics of yore. It’s nice that they’re still making movies like this in 2014-2015, and we give everyone involved due credit for that. But it’s a double-edged sword... 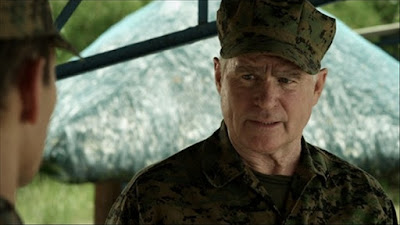 Sure, we appreciate that this movie is after the fashion of so many we’ve watched on VHS, but the other side of the coin is that it can get very samey, like we’ve seen all this many times before. Even the casting of our heroes Treat Williams and Mark Dacascos  (as well as Philippine mainstay Henry Strzalkowski) serve to reinforce this fact.

This is a movie that wishes it came out around 1994, give or take 5 years or so, and we say good on ya, but it does tend to get a bit run of the mill.  Director Brian Clyde also did the very, very similar The Hunt for Eagle One (2006), but in that case Dacascos’s General was Rutger Hauer, not Treat Williams.

Naturally, the shooting, beat-ups, and blow-ups are all present and accounted for, with what looks like minimal CGI, to the movie’s eternal credit. A helicopter and a few huts even explode as well, reinforcing the old (ish) school vibe. But this is a movie that very much fits the standard, and is neither good nor bad. It just is.

Featuring an amusingly abrupt ending that seems like it was recycled from footage from something else, as if they didn’t have the time, money or inclination to bother with a denoument, Operation Rogue fits in well with others of its ilk. If you like them, you’ll like this. If you don’t, you won’t. It’s as simple as that, which is fitting, as simplicity seems to be the order of the day here.

Comeuppance Review by: Ty and Brett
Posted by Ty at 6.9.15

I know this has got an exploding helicopter in, but I recently slogged my way through The Hunt For Eagle One and I'm not sure my wounds have healed enough to attempt a viewing of this.

I completely agree with everything you wrote. A solid movie, VERY similar to the Hunt For Eagle One movies.

I really dug this one. Got the UK DVD as I didn't feel I should be paying full price for the US disc when it's only a DVD-R!

Exploding Helicopter: This one is way better than Hunt For Eagle One. Treat and Mark are solid.

Explosive Action: Cool you bought a copy! It's worth owning for the old-school action factor.