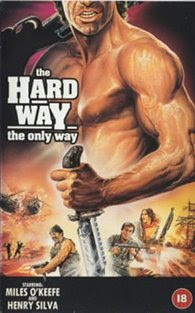 
“You shouldn’t have killed that Corn On the Cob” - Pinero

When a bunch of white guys in suits in a U.S. government office (including a man - according to what we heard - named Senator Towel...Senator TOWEL. Gotta love stuff that’s lost in translation) decide that a Bolivian drug lord named Pinero (Wagner) must be eliminated, they send in the best: A three-man commando squad consisting of Karl (Rodriguez), who looks like a young and vigorous Don Rickles, Ibanez (Chuck Bishop in his only role to date), and, of course, the leader, True American Hero Bull (O’Keeffe).

The suits even pass out headshots so their fellow pencil-pushers can see what the guys look like. The problem is, a sadistic and ruthless overlord named Wesson (Silva) is willing to protect the drug empire with all the resources at his disposal, and there are plenty. Countless goons that are armed to the teeth are willing to sacrifice everything to keep Pinero alive. Three of America’s finest versus unending waves of bad guys? Seems like the odds are in OUR favor. But will our heroes penetrate the enemy stronghold? Find out today!

Not to be confused with the 1991 James Woods/Michael J. Fox outing, this, the original The Hard Way, is essentially a 90-minute chase through the jungle - but it manages to rise above its lowly station. In fact, we won’t even dub this a “jungle slog” like we normally might, because there’s nothing really sloggy about it.

Without doubt, the movie is lacking in the originality department; baddies shoot and chase, good guys shoot and chase, etc., for essentially the entirety of the running time, but it’s all so wonderfully excessive, you just have to love this particular romp. As we always say, the Italian jungle epics are the best, and journeyman director Michele Massimo Tarantini turns in an against-all-odds winner this time around. 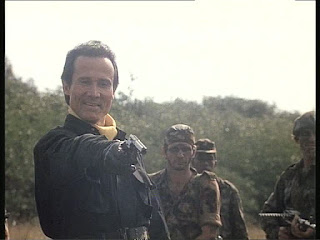 There’s a lot to love about The Hard Way: it’s uncompromising yet fun, there’s no annoying reporter character or irritating child character, it delivers mindless shooting and explosions with style and aplomb, it came out in the golden year of 1989, it has an awesome score by Luigi Ceccarelli, there are cool helicopter shots (and a few of them explode - seemingly a well-placed rope is all it takes to set them ablaze), dudes scream while they fire off an endless supply of rounds on their machine guns, and Henry Silva has an evil ascot. He also gives commands on the world’s biggest walkie talkie.

Bull - not to be confused with the wacky bailiff on Night Court - lets his grenades do the talking, though when Miles O’Keeffe does speak in this movie it sounds like he’s doing a rather lame Humphrey Bogart impression. At any moment you think he’s going to end a sentence with “...shweeethaaart”. There are even BAZOOKAS! And they get put to good use, too. Trust us.

Listen, if you want something intellectual, watch Mindwalk (1990). If you want to watch cannon fodder be mowed down by machine gun fire and watch crap get blown up, The Hard Way is the movie for you. It’s G.I. Joe and the A-Team writ large....sure, there are lots like this, but this one is done well. It should have been on the Mercs box set. They didn’t waste time with simply exploding huts, they blew up brick homes! The bullet budget must have been enormous, as the kill count rivals anything we’ve seen, and we’ve seen ‘em all, just about.

Lest we forget the Prerequisite Torture (this time of Rickles) (as we called him), and it’s all in a scenario where the baddies can’t hit our heroes, but our heroes have no trouble hitting the baddies. It’s all very NES-esque. From the music, to the setting, to the shooting, to the 1989 timeframe - it could have been a Nintendo game.

Shot in Brazil and released in Germany and Japan on VHS (and later on DVD in the U.K., we believe), The Hard Way will, to paraphrase the great Henry Silva, ‘bring you great satisfaction’, should you get a chance to see it. And we recommend that you do.

This is a great jungle slog, but hard to come by. Rambosploitation/jungle slogs seem to really have taken off lately judging by postings on the usual movie blogs. So, is it time for Hollywood to remake Strike Commando?

This was tough to find. Thankfully it was on Youtube. There's no need to remake Strike Commando, haha. There's only one Reb.