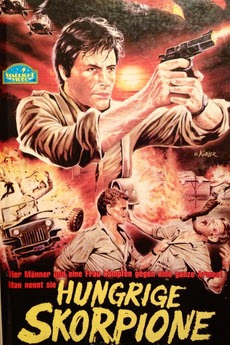 On the island of Manioca, an evil, “El Presidente”-style leader named Gomez has kidnapped the son of the rebel leader, Cordura (Fantasia), who is described as a “symbol of freedom” for the Maniocan people, although they seem pretty free as it is if we’re to judge by their carnivale-style antics. A group of men in suits in Miami who work for a mining operation, and are tied up in the whole revolutionary battle financially, decide they could either spend millions of dollars mounting a rescue operation to save the son, or they could do it on a budget by employing The Wild Team!

So naturally they hire a man named Martin Cuomo (Sabato) - not to be confused with action powerhouse Mario Cuomo - and his group, consisting of Theo (Pochath), Paco (Borghese), Marius (Rassimov), and female explosives and short-shorts expert Sybil Slater (Kent). The Wild Team, or perhaps the Thunder Squad (they should really make up their minds), go to Manioca and shoot/blow up some people/huts in order to save the boy and win the day. But will they be successful?

This is a disappointingly mediocre jungle slog, especially considering the fact that Lenzi directed it and it has some top-name Italian action B-movie stars. It’s not a bad movie, but it’s just kind of blah. Even at less than 90 minutes, it drags. It’s all very by-the-numbers, a typical - even stereotypical - exploding hutter that you’d have to be a diehard fan of Lenzi or any of the personalities involved in order to really want to see.

But at least they’re open and honest about what this is: at one point, Cuomo, played by Antonio Sabato Sr., says, in reference to Sybil and her explosive abilities, and we quote, “she’s gonna blow up that hut.” That might be the first ever on-camera bit of spoken dialogue directly referencing an exploding hut. So the movie may go down in history for that, but there’s nothing else standout about the film overall. 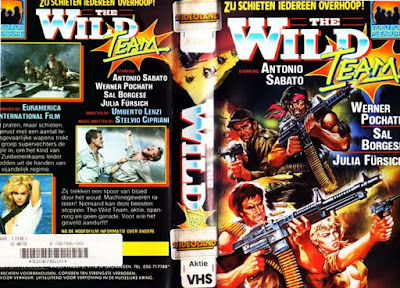 There’s really no character development per se, so you don’t truly care about the characters or their mission like you should. The sole reason you might care is because of who the actors are and because fans know them and have seen them before - and that’s not good. It’s unfair to put all the weight on the personalities of Sabato, Pochath, Rassimov and the rest, simply because we know them and have seen them previously.

They should all have been individually built up a bit more. That being said, there is a very silly fight scene where you can’t tell if what you’re hearing is the sound of punches connecting or someone slappin’ some bass on the soundtrack. Truth be told, the best part of the movie is probably the Stelvio Cipriani score, which is really no surprise. And there’s something cool involving a bow and arrow. But that’s pretty much it.

Because it lacks edge, surprises, or anything really impactful, The Wild Team is a miss for Lenzi and the gang. In brief, this team really isn’t that wild; it should have been wilder. Like Jack Wild.

Also check out write-ups from our buddies, The Video Vacuum and Cool Target!