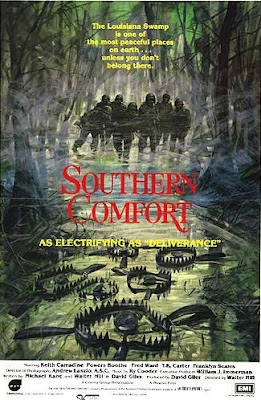 In 1973, a regiment of the Louisiana National Guard travel out to the remote bayou for a routine training mission. The men, including Spencer (Carradine), Hardin (Boothe), Reece (Ward), Poole (Coyote), and Cribbs (Carter) have differing attitudes towards life and their situation. It all seems simple enough, but when they accidentally draw the ire of some local Cajun folk, the crafty Cajuns start killing them off one by one as punishment for their perceived incursion into their territory.

Not to mention their capture of a local man, simply known as Trapper (James). Now trying to survive with limited resources in a harsh and unfamiliar environment, our National Guardsmen literally have to fight their own war at home. Who will die, who will survive, and who will live to find out the true meaning of SOUTHERN COMFORT?

Only the genius of the great Walter Hill could take elements of the Wilderness Horror subgenre, the war movie, the Western, the suspense thriller, and the Asian-style “Heroic Bloodshed” film, and tie it all together with allegorical and metaphorical themes and undercurrents, all the while on the surface allowing it to appear to be a Deliverance/Most Dangerous Game-style survival outing.

Strictly speaking, this isn’t a straight-up action movie, though it certainly has those elements, but Hill’s style, especially with this movie, was so imitated and duplicated in the years following this, we just had to include it here for being the benchmark that it is. Just watch any Cirio Santiago-directed jungle slog or any Italian war film shot in the Philippines (i.e. Eye of the Eagle III or Dogtags, respectively) and you’ll see what we mean. The influence of

Southern Comfort reverberated throughout the video store era of the 80’s/early 90’s and beyond, and it’s easy to see why. There’s a certain disturbing quality to it, especially in the final third. And as much as we enjoyed Hunter’s Blood (1986), that film can’t really compete with the staying power of Southern Comfort, because there’s so much more depth here, despite the surface similarities. Or perhaps it’s the presence of Joey Travolta. One or the other. 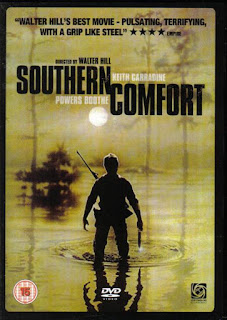 The cast is killer, the Louisiana locations are both picturesque and unsettling (captured gorgeously by cinematographer Andrew Laszlo), and the Ry Cooder score is the icing on the cake. The cumulative effect of the clever writing, brilliant direction, the great cast, strange yet pretty locations and the top-notch score is powerfully effective. You can’t ask for much more. If we have one minor quibble, it’s that the 105-minute running time might have been able to be trimmed down a tad. But everything else is in the “win” column for this fine film.

In high school English class, we learned about the four main drivers of narrative conflict. These are: Man against man, man against society, man against nature and man against self. Southern Comfort is one of the few movies that articulately expresses ALL of the four conflicts.

But one of the other themes - and a constant in the work of Walter Hill - particularly stood out: the nature of masculinity. What does it mean to be “a man”? Is there a type of man that is “best”? One that is more effective? Does losing at a certain conflict make you “less of a man”? All these questions and many more are lurking just beneath the surface. 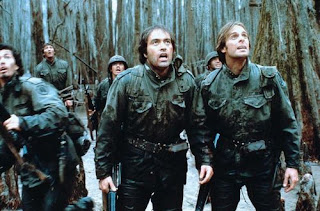 Hill also shows that not all the Vietnam-era action happened in Vietnam. This provides a point of difference that is worth noting. There’s some un-PC dialogue we all love and enjoy, and much like The Thing (1982), there are almost no women in the entire movie. The Shout Factory DVD/Blu-Ray combo is the package to buy - the movie looks brilliant and there is an insightful documentary included as well.

Southern Comfort is much more than a “man’s movie” - it cleverly explores themes that are damn near primordial in mankind. But it never loses its power to entertain, which is what good storytelling is all about. We strongly recommend it.