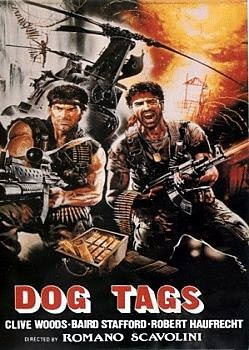 
When an author, in 1984, receives word that a man in Vietnam is willing to finally tell the tale of a series of events that transpired a decade earlier, we are transported back to 1974 and a very dire situation is unfolding in the jungles of ‘Nam. After escaping from a prison camp, a group of soldiers are lost, angry, irritated and disillusioned. Capturing all the angst is a German photographer along for the ride.

When they do manage to make contact with Captain Newport (Monty), they are told they must recover some documents from a helicopter that has been shot down, which only adds insult to injury. The final straw is the fact that the supposed “documents” are gold bars, which only adds fuel to the fire of division going on amongst the soldiers. While all this is going on, the men have to avoid various other jungle pitfalls such as a leg amputation, murderous locals, unfriendly nature, and much more. Will these embattled enlisted men be encouraged or entreatied to end it all? Find out...

Dog Tags is writer/director Romano Scavolini’s follow-up to his horror classic Nightmare (1981), and those who have seen that can well imagine what he would do with the “namsploitation” genre. Well, here it is. It’s an exploding hutter with a difference. It’s unrelentingly dark, bleak, depressing and self-serious. Sure, that provides a point of difference with all the other jungle jaunts out there, who never come close to this level of straight-ahead dreary desolation. That said, the movie is very well-shot, with quality camerawork and creative lighting and angles, and the editing reinforces the “masterminds behind the scenes” vibe.

This would have been a home run if there was any character development. Imagine high drama but with a bunch of random people you know nothing about. There are many times when the whole outing becomes dull and loses any kind of drive. Imagine if Scavolini directed Platoon (1986) instead of Oliver Stone, but slower. That should give you some idea of what we’re dealing with.

Sure, there are a few blow-ups here and there, but the emphasis is surely on the grimness of ‘Nam and the human toll. In its single-minded fixation on that, the movie forgot to have one strong, clear baddie, a misstep we see all too often, and is another contributing factor to the movie losing focus.  All this is put in a clearly-delineated three-act structure, with epilogue, complete with title cards to help the audience.

In the cast department, we have fan favorite Mike Monty, a Philippines-shot movie mainstay, as well as fellow Romano, Romano Kristoff, who is also credited as being Second Assistant Director. Or maybe the credit-makers just got confused.

Nick Nicholson is also credited, but it must be a “blink and you’ll miss him” situation, and we definitely must have blinked, because we didn’t see him at all. There’s also the credit “Chris Hilton as Himself”. Okay. Good to know. Baird Stafford, so memorable from Scavolini’s Nightmare, returns as the soldier who, infamously, gets his leg amputated. If I may quote Scavolini himself, speaking about Stafford, from the book Spaghetti Nightmares: “He was also very effective in DOGTAGS because I managed to get him to accept the idea that he had to be sexually ambiguous. His leg being cut off clearly represents a type of castration, and it is his mutilated sexuality that, in the end, ruins everyone.” So now you know. Consider yourself warned.

Released on the small label Cinevest on VHS in the U.S., it didn't get wide exposure here, but that's more than a lot of other Italian productions got. Dog Tags succeeds stylistically, if not dramatically, and its style and substance seem out of sync with each other. Add to that the distressing, somber vibe, and it can make for a very rocky viewing experience indeed.

I don't have anything to say about the movie per se, but you have to admit that there was a slew of terrible (or just plain unmemorable) movies made with incredible cover art. I think a coffee table highlighting that artwork would be cool.

I remember watching this back in the late 80's (it got a VHS release here in the UK) and I remember it being quite gory (but apparently the BBFC had pre-cut it) I'd love to see an uncut version?

Joe: Can't agree more. Would pay top dollar for a book like that.