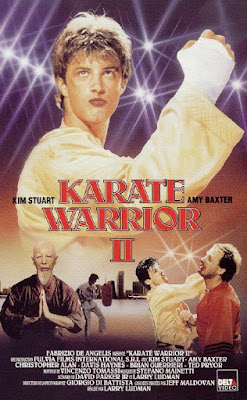 When last we heard from Anthony Scott (Stuart), he defeated his arch-rival Quino and rode off into the sunset (well, lotus-positioned off into the sunset if you want to get specific). Now living in Miami, Florida, Scott is somehow accepted into college.

He makes friends with an enthusiastic guy named Luke Morris (Haynes), who looks, by turns, like either a young Rick Santorum sans the sweatervest or a young Marc Summers sans the crippling OCD. Anthony soon runs afoul of a group of college bullies - COLLEGE BULLIES - called The Tigers, led by a guy named...Dick (Alan). Once Anthony starts seeing Dick’s #1 chick, Patty (Baxter), Dick gets mad and wants to take his bullying to the next level.

Anthony refuses to fight Dick outside of an officially-sanctioned bout, so they take to the stage of the college to have it out. After Dick is bested in the match, he gets really mad and calls in the original head of The Tigers, a sort of “Bully patient zero” named Mark Sanders (Prior). Because Sanders is so tough, Master Kimura (Watanabe) flies to America from rural Asia for the first time ever. But will it be enough for Anthony to be victorious?

Our old buddy Anthony Scott returns in this unnecessary sequel that is, possibly, stupider than the first entry. For a movie that doesn’t need to exist, extending the running time to a punishing 97 minutes is simply taxing the goodwill of the audience a bit TOO much.

Anthony Scott is still not likable, thereby erasing any chance for the sequel to improve upon what came before and justify its existence. He does get beat up a lot though, and other characters are constantly hoping to “teach him a lesson”. As referenced in the first film, we know Anthony Scott is true-blue American (with the mismatched voice of a 67-year-old American to prove it) because when he gets hungry, he requests, and we quote, “Hot dogs, hamburgers, or rib food.” RIB FOOD? What in the name of Larry Ludman is THAT? We may never know... 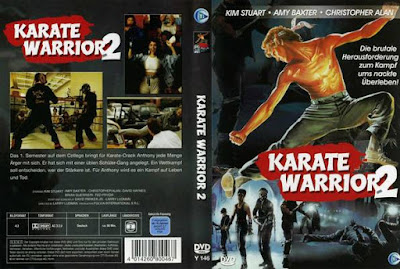 But his buddy Luke subsists solely on champagne and caviar, presumably fitting the definition of what people from other countries think Americans eat and drink every day. Luke warns Anthony against taking rides from strangers by saying “Haven’t you seen that movie The Hitcher?”, which we thought was an interesting reference, and he describes The Tigers as a “gang of delinquent Karate fanatics”. Said fanatics are so badass, they hang out at the local ice cream shoppe (and it IS a shoppe) and plot their evil deeds under Ben & Jerry’s banners. Their malevolent attitudes drip off them like so much Chunky Monkey.

For both the matches with Dick and Sanders, a simple stage like you’d see in any school gym is used. Not a ring. It’s also announced on the radio and the DJ looks like a young Johnny Depp. IMPORTANT NOTE: there is not just one, but TWO chicken mascots at the first bout. At the second match-up, people in horse suits and tiger suits also are seen. This is the most puzzling development since rib food. What the HELL is going on? Unfortunately, none of this sustains or justifies a 97 minute running time. This movie is just too damn long.

For a glimpse into the acid-washed late-80’s and to see a young Amy Lynn Baxter, Karate Warrior 2 could almost suffice...but the songs by a band named Glasswork aren’t as good as the Simon Boswell score of the original, and Ted Prior in a non-AIP role could have been more prominent. Adding more insult to injury, fan favorite

Jeff Moldovan did stunts but did not appear in front of the camera. He’s also credited as Jeff “Maldovan” - whether that’s a misspelling or intentional to help himself avoid being associated with this is not known.  It all ends on a freeze frame, which is normally a good thing, but the frame it freezes on is just odd and doesn’t chime with the rest of what we’ve just seen. But, then again, maybe that’s appropriate, as none of it made much sense to begin with. And not in a good way.

Perhaps all this, plus the fact that it’s all pretty darn juvenile, is what prevented it from ever securing a U.S. release. It seems only Italy and Japan have ever (officially) had the pleasure. Well, we’re here to announce that the rest of the world isn’t missing all that much. And the two chicken mascots never even fight, which would have been awesome.

I just checked on IMDB. Did you know there were six of these in the series? That's incredible! I've never heard of such a prolific outpouring of DTV movies in one series, let alone for a cheap knock-off of Karate Kid (they even threw in "Karate" in the title so they'd be next to one another in video stores).

After reading this, 1 1/2 stars sounds too kind

The half-star is for RIB FOOD. Haha.