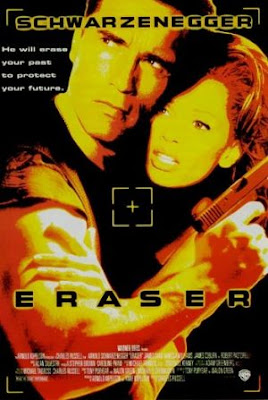 
U.S. Marshal John Kruger (Arnie, who is credited simply as “Eraser” in the end credits) is...an eraser, a man who works for WITSEC, or “Witness Security”, erasing the identities of people in the Witness Relocation Program so baddies won’t find them and kill them.

No one is better than Kruger at what he does, but he faces his toughest challenge yet when he’s assigned to protect Lee Cullen (Williams), a woman on the run. After working with the FBI on a sting operation involving illegal gunrunning  - especially as it relates to a high-tech new EMP gun - now all sorts of bad guys are after her, from corrupt U.S. bureaucrats to the Russian Mafia. (Not to be confused with Roma Maffia, who’s in the movie). Kruger’s rival is his former compatriot DeGuerin (Caan), who is a formidable nemesis, but Kruger’s got plenty of tricks up his sleeve besides erasing people, as we’ll clearly see. Will DeGuerin and the other baddies get ERASED...permanently?

Eraser is probably one of the last, best Arnold movies. It’s a fitting way to unofficially wrap up the “Golden Age” of his career of the 80’s and 90’s, because the movie is pure Hollywood ridiculous action in true Schwarzenegger style. It truly is an Arnold Schwarzenegger movie, a genre unto itself, if that makes any sense. You pretty much have to love it. It’s nice to see a younger, thinner, more agile Arnie, along with his unmistakable voice. Of course, he gets many classic one-liners to cap off many sequences.

The fact that Kruger is supposed to be a U.S. Marshal, but becomes an unkillable superhero who for all intents and purposes can fly and survive grievous injuries with ease, is an oversight of the best kind, something the audience has to go with and couldn’t do without, unless they wanted a much less entertaining movie. 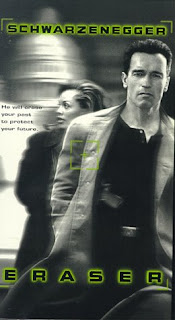 The whole thing is very 90’s, with classic computers, including the very-new “Internet”, and some now-vintage cell phones. The technology even helps Kruger with his job, stating on the screen “Prepare to Erase”. But whether tiny budget or huge budget, action movies of the day had one thing in common: people after “the disc”, in this case what appears to be some more hot technology, Minidisc. Someone always wants that darn disc. But you KNOW the action isn’t taking place in the present time because James Caan smokes indoors in government buildings. That’s the ultimate no-no. Only a true bad guy would do that.

Besides Caan, we also have Vanessa Williams, who confronts James Cromwell, stating to him that at the Cyrez Corporation, “treason is part of the corporate strategy!” - which sounds like a perfect ad tagline for them. Williams has had a long and storied career, but is only really relevant to fans of this site as co-star of Under the Gun (1988) with Sam Jones. So, between this and that, her action pedigree is surprising and pretty respectable.

While we often joke about the star singing the end credits song (like we’ve done for Jerry Trimble, etc.), in this case, Williams actually does, because this is a Hollywood production, after all, and they can get high-caliber talent. There is another rockin’ tune that plays after the movie, which we suspect is Trevor Rabin’s “Caught a Train”, but we’re not sure. As far as the soundtrack itself, there are those wailin’ guitar squeals heard often, which we liked because we thought it was a throwback to the 80’s. 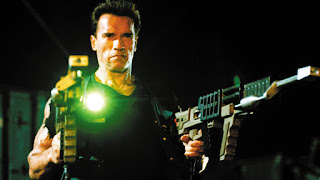 Watch out for a cameo from Sven-Ole Thorsen towards the end of the movie, uncredited, as a Russian thug. Evidently, he and Arnie are buddies. Arnie should have advised him against being in Fatal Combat (1997). Another familiar face for us who turned up briefly was Patrick Kilpatrick, which helped to seal Eraser’s connection to other action movies of the day.

We also liked seeing James Coburn, if it was a pretty small role, but in a movie filled with actors with distinctive voices (i.e. Arnold and Caan), he stood out. Pastorelli added energy as Arnold’s sidekick, and full marks go to one Andy Romano, who played Undersecretary of Defense Daniel Harper. Romano is one of those character actors that has been in tons of stuff, but gets little acclaim or recognition. We try to celebrate these people, especially when they shine, and here he certainly does as one of DeGuerin’s partners in crime.

If what we’ve read is true, Eraser was a troubled production with many problems along the road to completion. It’s one of those situations where there are many writers and people have to be brought in to do tons of rewrites. Maybe it’s because some Law & Order people started the script, or heavyweights like Frank Darabont and even John Milius came in to polish things up, but, from a viewer’s perspective, you really can’t tell.  Nor should you.  The whole thing is improbable enough - any behind the scenes flaws are papered over invisibly to us. Eraser is classic, big-budget, Arnie Action All the Way - call us old-fashioned, but we really enjoyed it.

I always loved this one. I agree that it's the last great Arnie flick.

Can't agree more. This one delivered the Arnie 90s goods. His later 2000s work was never as solid as this.

This was a solid Arnie movie, which I watched in a theater. It's not as good as his 80s classics, but what is?

Very cool about seeing this in the theater! That must've been fun. Commando is the one to beat. If he's going to make new movies, he should focus on doing one-man army types.