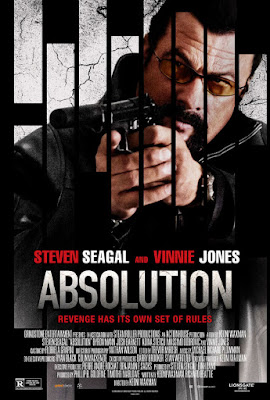 
A man known only as The Boss (Jones) is some sort of crime lord but also has a kill room where he tortures and murders the captive victims of his insane rages. When one girl, Nadia (Stetcu) escapes The Boss, she ends up crossing paths with a hired Killer - said to be “the only guy who can do the job” - named John (Seagal). John, a rotund man of girth, teams up with an actual Martial Artist named Chi (Mann) so they can both fight the baddies that are after them - some for political reasons, some for personal ones. After a lot of violence and bloodshed, the final confrontation occurs: The Boss vs. John. Who will feel the ABSOLUTION?

Absolution is proof that they are indeed still making Steven Seagal movies. Maybe it’s not that difficult to head off to Romania for a while and, armed with a computer that can do CGI bullet hits and editing software that can speed up fights and take away frames, come back with something that you can release to DVD.

Presumably Seagal himself doesn’t have to appear that long on the set, as he has other people do his ADR, his stuntwork, and even his dialogue scenes, as stand-ins, well, stand in for him. Many times this is very obvious that Seagal is not actually there listening to the dialogue said by other people. Usually his stand-ins look like Hollywood producer Robert Evans or Roy Orbison. So now you’ll know what to look for. It’s possible some of the stand-ins even have glasses or blonde hair, that’s how little they care to make it match. (That’s a joke, but very close to the truth).

Just exactly why Seagal doesn’t do these fundamentals of filmmaking remains unexplained. Is he some sort of Hollywood royalty that thinks he is above doing these things? Better question: what does this free up time for him to actually DO? What is so important to him that he can’t really even appear in his own movies, but for a bare minimum? When did he get so lazy? Why is he running away from himself? (Stay tuned until the last paragraph for a potential answer). 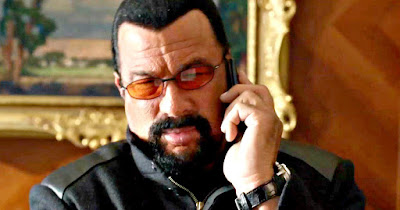 We’re not really sure who is watching these Seagal movies (besides us, obviously, but we have a website about direct-to-video action movies - what’s everyone else’s excuse?) - and, if people are watching them, are they taking them seriously? Are they meant to be taken seriously in the first place? Judging by Seagal’s narration about him being a bad man in search of absolution, whatever that may mean, we think the answer may be yes, interestingly.

Maybe the foreign markets eat these things up, we don’t know. Thankfully, when Seagal is talking (and not someone else talking for him), he doesn’t lapse into a random Cajun accent too much, but you never know when it will strike. It’s like a cobra. A Cajun cobra.

Smartly, the filmmakers brought a solid actor and quite good Martial Artist named Byron Mann to pick up Seagal’s considerable slack. The movie could have starred Mann and been perfectly fine, if a bit junky. However, the two of them walk away slowly from an explosion, so, maybe there was some bonding there. Fan favorite Vinnie Jones as the uncreatively named “The Boss” (Seagal’s name is “John” in the movie so the writers get zero points for creativity in naming the characters) is really at his worst here. Not him, per se, it’s not his fault, but the role is weak. But the guy likes to keep working, so, lord bless him.

But as a pseudo-Saw-type monster/crime boss, Jones doesn’t shine like he should. It could’ve been anyone wearing that apron in that green-tinted room.

Seagal is a victim of his own choices in life. He is where he is because of no one but himself. He wanted to place more emphasis on being some sort of blues-playing Buddha than on doing what he does best. He should consider being less lazy and arrogant and instead put some energy into what he puts out there with his name on it. If he were to reverse course and do that, we might really have something going forward. But as it stands, this is pretty much standard Seagal muck.

I'm still watching Seagal's films and I mostly find them entertaining, this one was OK, not as bad as Out of Reach or Attack Force, but not as good as A Dangerous Man, The Keeper or Born To Raise Hell.

In my opinion it is not only like a copy of the other Seagal-Movies. The look of this one is also very cheap. I always try to give one of his movies a chance or to find something good in it but "Absolution" was near to stop watching it in the middle.

Had you the chance to watch this "Elimination game" (not a Seagal-Movie) with Dominic Purcell. It is not weak, no, it is a crap. A waste of lifetime.

And a happy new year foor you and your families.
Harry

Happy New Year! My favorite movies of 2015 were Skin Trade with Dolph Lundgren, Redeemer with Marko Zaror, and Close Range with Scott Adkins.
I think Absolution was better than most Seagal movies since 2000, mainly because they made the wise decision to let someone else take on much of the action. Regarding Seagal not doing enough in his movies, I guess the budget isn't large enough to hire him for enough days, especially with disc sales dropping continuously. The German DTV market is probably the one keeping Seagal, Dolph, Adkins et al. in action.

I have been reading your website for at least a year now. I can't begin to tell you how many reviews I've read. Suffice to say, it's a lot.

I want you to know that after all this time, I still keep anticipating new reviews. Why?

Lines such as "John, a rotund man of girth, teams up with an actual Martial Artist" is nothing short of comic brilliance.

I had to stifle laughter at work as I read that. That, good sir, is Internet gold.

And you are more than right on the money when it comes to your final assessment of Seagal. Never in the genre have I seen one actor come out of the gate so well (his first five films were excellent) drop into obscurity so quickly due to his incredible arrogance and laziness. It's an insult to audiences who buy his DTV stuff expecting to be entertained.

As usual, keep up the great work. I love this site.

Wow.....didn't you guys like anything about the movie at all?
I thought it was OK (if a little generic) but at very least, it had an easy to follow plot, and not much filler stuff (that once infested his movies from around 2004 -2007) Seagal was pretty bad ass in this one. I think the stoicism is here to stay guys (and he was never thst acrobatic a fighter to begin with) and at 63 years of age, I don't we're going to get some eleventh hour turn-around. I think the reason people tend to 'Rose-tint' his earlier movies, is more down to the fact that everything was better when we were younger (including the way they shot fight scenes) Looking back his earlier works, MARKED FOF DEATH is just as shoddily made as this movie. Seagal still has the moves, but I personally blame the rapid quick cut editing. If you watch a lot of behind the scenes stuff from his recent DTV stuff (or his recent demos in Russia) you can see how majestic his aikido still looks, when shot from a distance. I thought Sensei did pretty well with this one (but will admit that the movie would have benefitted from 1-2 more fight scenes, to tighten up the pace a little). I came back briefly last year to review this on my blog (don't know if you read it or not?) Did you guys know this actually got an extremely limited U.S cinema run?

Venom: This could've been better, but Seagal is up to his old lazy tricks.

Harry: Happy New Year to you too! We'll try to avoid Elimination Game for now.

Roger: Happy New Year! We agree that its obvious that they need a martial artist to prop him up. Interesting about the German market. At least Germany is enjoying (?) them. Haha.

Joe: Once again, we sincerely thank you for your readership and your kind words. Thanks for reading out our earlier reviews. Have you checked our write-ups for Death Ring and Ring Of Steel? People seem to like those. Write back anytime.

Lee: We liked Byron Mann and he was solid, the rest of the movie is a bit weak. We blame the editing too. Didn't come to CT. We see most of your points and we try to be mean at all, but Seagal is so lazy, wished he tried harder.

Some creative picks there. Thanks for showing some love to indie action.

Saw a few other sites sum this up as Seagal's John Wick (since his last few had the Taken/Man on Fire touch and earlier work was basically Commando).

Oh I didn't say that the other sites were right, LOL, just summing up what I saw. In fact, I'm in the process right now of tackling virtually every single Commando/Leon the Professional/Man on Fire/Taken type movie for We Came from the Basement podcast and some of his last few films had similar styles to Denzel and Neeson's type of gritty material.

I remember not much happening in Urban Justice save for Danny Trejo making a cameo and Eddie Griffin talking smack which got annoying fast. LOL. But it sort of was a Hard to Kill/Out for Justice tribute at times wasn't it?

LOL. The ultimate "tribute" to those movies is Out For A Kill, classic silly mashup of titles. That's a great idea for your podcast, lots of fun hard R action.

So many fun games around those type of movie naming games especially when one wants to check and see if that title has actually be utilized by the Hollywood bigwigs.

Oh man everyone would be in heaven for something like that. Just saw that guy in Scorpion King 4 last night.

That's great that he's back in action.