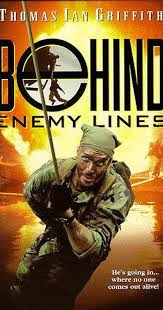 Mike Weston (TIG) is an ex-Marine who just wants to forget the hard times and live it up on his boat in Tahiti with his buddies. Unfortunately, when he discovers that his former partner from his mercenary days, Jones (Mulkey) is being held captive in prison so he can be used as a bargaining chip so a sadistic general can obtain some nuclear triggers, Mike Weston suddenly begins to believe in the awesome power of Mike Weston again. Rousing his washout friends from their sloth, they all undertake the mission of a lifetime: to save their friend and stop the triggers from falling into the wrong hands. Also Weston’s sister Kat (Matthews) and taxi driver Phred (Confiado) are along for the ride. What will happen…BEHIND ENEMY LINES?

Behind Enemy Lines - not to be confused with the 2001 movie with Owen Wilson and Gene Hackman (or the 1987 Cirio Santiago film of the same name) - starts out seeming ALMOST mainstream, but then it quickly slides into a quicksand of repetitive stupidity it can’t pull itself out from. If you’ve ever seen Missing in Action (1984) or P.O.W. The Escape (1986) - interestingly also known as Behind Enemy Lines - this is pretty much more of the same, except it came out in 1997, when things were souring in the DTV world.

Thomas Ian Griffith (who we affectionately call TIG) looks a LOT like Ben Affleck in this movie. I mean, a LOT. It was the 90’s after all, and the ‘fleck was on the rise. The fact that it was the 90’s might also explain why there’s a character named Phred. P-H-R-E-D. He even has a large sign on his taxi proudly proclaiming PHRED is coming. All that being said, The movie is slow and unoriginal, with nary a surprise in sight. The dialogue is so overpoweringly dumb, it feels like it was created by - and aimed for - small children. This is an uneasy mix with shooting and blow-ups in the jungle, not to mention the time-honored Prerequisite Torture. So you can have all the guard tower falls you want, but if the spoken dialogue is basically “nyah nyah nyah nyah nyah”, the audience feels insulted and cheated. 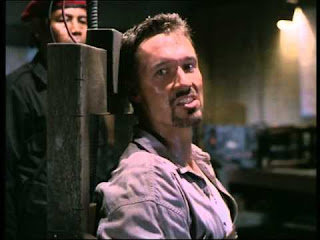 Another reason the audience doesn’t get hooked in, and thus interested in the plight of the characters, is that there is seemingly a lot of dead time with characters jawing about stuff we don’t care about. The main baddie should have been clearly defined and ever-present, and the whole outing streamlined with less blah-blah and more rockin’ action scenes. We’re not even going to ASK for character development. We realize that might be a bridge too far.

Naturally, it all ends with yet another final warehouse fight, and then disappears off the screen like the smoke from a blown-out birthday candle. And it leaves just as much of an impact on your eyeballs. Sadly, Behind Enemy Lines is just another movie on a screen. It probably sat and collected dust on video store shelves everywhere back in the 90’s. It adds nothing new to the table except annoyance. We really didn’t like it.

Also check out write-ups from our buddies, The Unknown Movies and The Video Vacuum!

I thought this was pretty good, especially for being made as late as 1997. It didn't have much of a plot, but it had enough action for me. Nowadays, TIG is writing comics, e.g. John Carpenter's Asylum.

I personally thought this film was pretty damn kickass

Roger and Venom: I guess we respectfully disagree on this one. Something about it just annoyed us. We liked TIG in it though. That's cool he writes comics now. He should make a comeback in action one day. Not too late.

He made Excessive Force around the same time as Robert Patrick's Zero Tolerance and which predates Training Day, 16 Blocks, the Assault on Precinct 13 & Sinners and Saints and other sudden remergence of aniti-hero cop taking on an entire corrupt department flicks.


Personally, I think you would be more irritated by Griffith's Blood of the Innocent/Beyond Forgiveness or Ulterior Motives which showcase Thomas' abilities but have schlocky development.

I also am less harsh on this one since its like you've all mentioned, another Rambo/Broken Arrow/McBain/Uncommon Valor/Navy SEALs type flick before the endless waves of stock footage DTV flicks.

Can't agree more with your comment. He needs to make a comeback. We've reviewed Ulterior Motives and you're right, it was very poor.