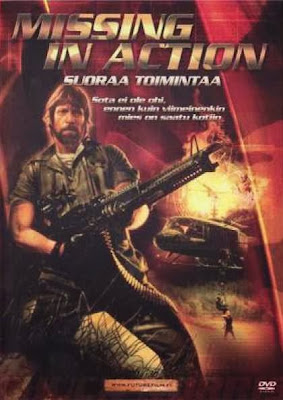 Col. James Braddock (Chuck) spent several years in a North Vietnamese POW camp. After escaping, he’s now home, but he’s a troubled man. He’s invited by the American government to go back to Vietnam to investigate/talk about the phenomenon of soldiers still Missing In Action. Tensions flare, thanks to the evil General Trau (Hong). Braddock, being the badass that he is, decides to go off on his own into the jungle (actually with Tuck (Walsh), an old army buddy), and rescue any remaining POW’s himself. While in the midst of their mission, they face an endless stream of baddies trying to stop them. It’ll take all the firepower and skill Braddock has to defeat the enemy and save the missing men. Can he do it?

This is classic Cannon all the way, and they really hit paydirt with this one. Thanks to the high-quality cinematography, the rousing, triumphant score, and the longer running time, Missing In Action has that big-screen feel. While the pace, at least for the first half of the movie, may seem a bit on the slow side to modern viewers, that’s just the way things worked back then. It’s a pre-ADD generation action movie. And we’re all the better for it. It’s ultimately a rewarding experience, and Cannon (as well as moviegoers) obviously thought so too, as this spawned two sequels to date (maybe we haven’t seen the last of Braddock...?).

Surely this film was at the forefront of the exploding hut/guy falling out of a guard tower/mindless shooting jungle movie back in the golden age of the 80’s. Along with the Rambo series, not to mention countless Direct-To-Video items, these movies capitalized on the craze for patriotic movies with plenty of violence that were so in vogue in the Reagan 80’s. To hammer the point home even more, stock footage of Reagan is actually IN Missing In Action 2. If you even THINK about communism, Braddock, Rambo, or any number of other heroes will mow you down with a machine gun that’s taller than they are. So there. Take that you stupid commies. 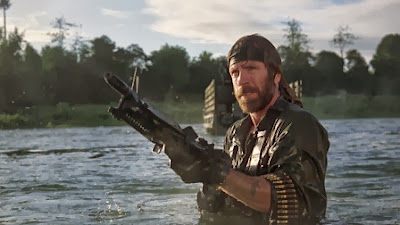 As for the cast and crew, Chuck Norris here started to take tentative steps toward his Texas-based clothing style that would manifest itself most fully during the Walker: Texas Ranger years. His hair and beard are at their reddest and most impressive here, and when he wears his sunglasses, you really can’t even see his face. M. Emmet Walsh is always a welcome sight to see, and he plays a similar character in Red Scorpion (1988), which was also directed by Joseph Zito. As good as Walsh is, we also felt the role could have been played by Nick Nolte.

Lenore Kasdorf of L.A. Bounty (1989) fame is onboard, as well as James Hong, who’s been in pretty much everything. For our purposes here, he was in the same year’s Cannon vehicle, the great Ninja III (1984), and much later was in Talons Of the Eagle (1992). Willie Williams, whose entire movie career seems to have been in Vietnam (or Nam-like) Jungle movies such as Final Mission (1984), Savage Justice (1988), Saigon Commandos (1988) and, not coincidentally,  P.O.W. The Escape (1986), continues his tradition with the movie at hand today.

Also it has been said that none other than Van Damme appears in an uncredited role as “Car Driver”, but we didn’t see him, so we can’t necessarily confirm that that’s actually true. But he’s also credited with stunts, along with Aaron Norris, who would go on to direct the second sequel, Braddock, as well as Dean Ferrandini, who would go on to direct Overkill (1996). The next year after this, Zito would direct the ultimate Chuck movie, Invasion U.S.A. (1985) This is a nice trial run for that masterpiece.

If there was going to be a movie version of the 80’s Nintendo game Jackal, this could be it. It’s a shoot-em-up where the hero must save the hostages. But here the hero is outspoken on the M.I.A. issue and is Chuck Norris. I guess those are the only two differences.

Missing In Action is undoubtedly a classic and is completely worth seeing. In our eyes, however, the series would improve even more in the subsequent two outings, so watch out for those as well.

Also check out write-ups by our buddies, DTVC and Ruthless Reviews!

I like both 80s action films and modern films. Don't really like the term "ADD generation" though, because I actually know people with ADD and it's not something you should make fun of.

When we mean ADD, we mean all the quick fast edits of modern movies. Everything is go, go, go. More action movies should breath a little.

The MIA trilogy is one of my all-time favorites. The first movie was apparently inspired by James Cameron's Rambo II script, copies of which were made and floating around Hollywood. The first two MIA movies were shot back-to-back with the intent of releasing the Lance Hool-directed movie first. Cannon, however, decided that the Joseph Zito-directed movie was better, so it became the first MIA movie. You found the Finnish DVD cover. Nice! The Finnish name Suoraa Toimintaa actually means Direct Action.

I LOVE THIS MOVIE!

While I would flip-flop on your assessment that Invasion U.S.A. is Chuck's best movie (I would rank it his second-best), I think Missing in Action is his best. It combines the jingoism running rampant at the times (this movie actually pre-dates Stallone's Rambo: First Blood Part II) with Chuck's martial arts prowess.

I think the pacing, story and music were all great. When people ask me about all things Chuck, I always tell them to start with this movie.

One final thing: If you get a chance to read the Cameron Rambo script, do yourself a favor and do so. It was supposed to be a dual Stallone/John Travolta movie after they teamed up on Staying Alive. Interestingly enough, I don't think it's ever mentioned on the Rambo DVD special features.

Would have killed to see a Travolta\Sly team-up back in the 80s. That would have ruled.