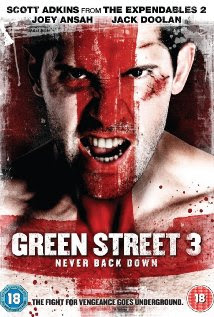 Searching for answers about his brother’s murder, Danny (Adkins) returns to Green Street and his old Firm (apparently a collection of soccer hooligans who support a certain team) after some time away.  If it’s one thing the GSE, or Green Street Elite, like to do, it’s brawl. But the brawling went too far, and Danny is mad. He’s also disappointed that the once-triumphant GSE has decayed and is no longer on top. So he takes second in command, Gilly (Doolan), and whips him and the Firm into shape with a comprehensive training regimen. Meanwhile, Danny and DCI Jones (Ansah) are at odds with how to deal with murder and hooliganism in the Firm (s). In order to get close to the truth, Danny has to now fight in brutal, no-holds-barred group Punchfighting free-for-alls with various other UK Firms. He also finds time for love with beautiful barmistress Molly (Barnfield). The inevitable final battle eventually takes place with arch-baddie Mason (Wilding), and there are some twists and turns along the way to justice…but will Danny get there in one piece?  Find out today!

We loved Green Street 3, and we’re happy that the franchise was re-purposed from an Elijah Wood drama to a Scott Adkins Punchfighter in two easy steps. Notice they took out the word “Hooligans” from the title. Kind of like how Rambo III (1988) should be First Blood III, but who’s counting? Anyway, GS3 is everything this kind of movie should be, and perhaps just a bit more. It relies on tried and true 80’s traditions to come out with a completely winning formula. Hey, why mess with perfection? The filmmakers had the wisdom to realize this when so many others don’t. That’s just one reason why GS3 delivers the goods in spades. 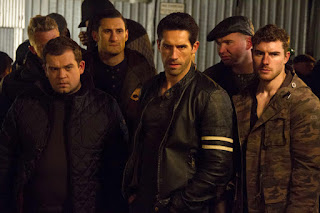 Notably, GS3 would totally work as a drama if all the fighting was taken out. It has that gray-skies, “kitchen sink”-style drama the British are so good at - what we call Brit Grit - it just so happens that they added Punchfighting and brawling to the mix, to excellent effect. Fan favorite Scott Adkins is in his element and in top form, and the rest of the cast is top-notch as well. The cinematography is effective and non-junky looking, thankfully. Awesomely, the score by Paul Arnold and Andrew Barnabas is synth-drenched and you can’t help but recall the golden 80’s. The movie even ends on a freeze-frame. As if that wasn’t enough, one Leavon Archer contributes two Totally 80’s-style songs, “Pushing Back” and “Trouble”, further reinforcing the coolness.

And there ought to be 80’s-style songs, as there are - get ready for this - SIX training montages. We haven’t seen this many training montages since Rocky IV (1985). We love a good training montage, and we give the movie a lot of credit for having the guts to do this and not caring what anybody thinks. If the music wasn’t good and we weren't invested in the story and Scott Adkins wasn’t involved, it might not have worked, but it totally does. We wanted to get in shape like Gilly and the gang and we were cheering. Also, they PRACTICE their head-butting technique on the heavy bag. And Gilly goes into Punchfighting brawls wearing a sweater and a collared shirt. Only in the UK, we guess.

So wipe away your depression, grab a few pints, and enter the Punch-brawling (yet another new term?) world of Green Street 3. You’ll be glad you did.