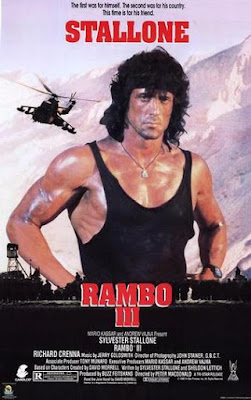 
At this point in his life, John Rambo (Stallone, of course) just wants to be left alone. He lives and works at a monastery in Thailand, and he’d rather practice Buddhism than war. Though he does do some stickfighting on the side so he can win some extra cash from the locals. When  his old buddy from ‘Nam, Col. Trautman (Crenna) finds him and wants him to fight in Afghanistan against the evil Russian baddies, Rambo initially declines the offer. But when the head evil Russian, Col. Zaysen (de Jonge), kidnaps and tortures Trautman, Rambo snaps in to action. He goes from Buddhist monk to one-man wrecking crew at the drop of a hat, annihilating everything in his path as he helps the Afghanis - who, we must remember, were the good guys during this particular conflict. Will Rambo live to blow things up another day?

John Rambo returns - again - for this third and not-quite-final installment. In 1988, the world was still in the grip of Rambo Fever, which necessitated this second sequel, and later the cartoon series, Rambo and the Forces of Freedom, and finally the toy line based on the cartoon. And speaking of one-dimensional animated characters, here Stallone looks like a human cartoon.

Much like how the original Rocky (1976) was a sensitive, downbeat drama for the most part which then got distorted into something unrecognizable by the time of the countless sequels, here it’s easy to forget the original First Blood (1982) and its sensitive, troubled John Rambo character. Now he’s a ‘roided up superhero who can essentially leap tall buildings in a single bound and if he breathes on a helicopter it blows up.

Now, if you overlook the history of the Rambo series (hey, shouldn’t this movie be called “First Blood III”? No movies in the series before this were called “Rambo”...but we digress) there is plenty of stupid fun to be had. There is action and adventure aplenty, and first-time director (though he’d been in the film industry for many years prior) Peter MacDonald pours it on with aplomb.

Near-constant blow-ups, machine-gun shooting, knife-throws, horse chases, neck snaps, and tank and helicopter battles ensue. As exploding helicopter enthusiasts know, this has one of the best of all time. The explosions are classic 1988 explosions, and with a very big budget behind it, everything looks top-notch and they clearly didn’t skimp.

Of course, there is also the Prerequisite Torture - this time of Trautman - and we also get the classic “yelling while shooting a machine gun”, the exploding guard tower, and the evil Russkies, among many other cliches, but they’re the FUN cliches we all love and enjoy. You wouldn’t even think this movie would be necessary after Rocky single-handedly conquered Russia in Rocky IV (1985), but here Stallone goes again, basically winning the Cold War single-handedly - well, with Reagan of course.

Clearly the Italian film industry was paying attention, as there are countless...er...TRIBUTES to this particular Rambo outing, too many to name here. But as much as we enjoyed Rom Kristoff, Brent Huff, and Reb Brown, among others, following in his footsteps, there is without a doubt only one John Rambo.

Sure, Stallone doesn’t clearly delineate his words, and his excessive slurring causes you to need to put the subtitles on, but not to worry. Most of the second half of the movie is without dialogue, and is essentially 45 minutes of crud blowing up. Its nearest rival in that department is our beloved Commander (1988) - and, truth be told, Commander is probably more enjoyable and a better movie all around, and it was all done on a far lower budget.

But who needs words when Stallone’s mullet and almost 100-percent-of-the-running-time shirtlessness do the talking? Seeing as how he co-wrote the movie, and was juicing to a ridiculous degree, we felt it was pretty ‘vein’ of him. But it’s all part of the fun, we suppose. Because it was the wonderful 80’s, things were just bigger back then - bigger hair, bigger cell phones, bigger houses, etc. In the ever-escalating world of Rambo sequels, it means bigger knives, bigger machine guns, and far more lethal bows-and-arrows. 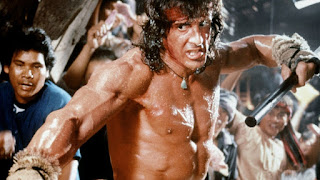 Of course it’s stupid, but it’s ENJOYABLY stupid. You root for Rambo to blow the bad guys to smithereens, and you have a good time doing it. As we’ve mentioned before, characters like Rambo - and, by extension, movies like this - stand as a bulwark against our wussy, overly-PC society. If we stop watching them, we’ll all slide even further down the PC slope into oblivion. For that reason alone, Rambo III is worth seeing, if not owning.

Also check out write-ups from our buddies: Exploding Helicopter and  Full Moon Reviews!

Good review as always, but as an apologetic Sly fanatic, I do want to bring up a few points ...

The screen shot with the red bandanna is from Rambo: First Blood Part II, not Rambo III.

The reason he goes from a practicing Buddhist to a one-man army was foreshadowed in the Trautman parable. Essentially, Rambo was always violent; the Army just chipped away the rough edges. Living and working among Buddhists wasn't going to change that.

Finally, I will have to respectfully disagree with your assessment that Rambo appears almost indestructible in this one (you called him a superhero). I think he suffers more damage in this film than any other.

What can one say about this classic? I'm a huge Rambo fan and I have the T-shirt to prove it. Your rating is accurate. It's not as good as the first two, but still a great movie. Stallone probably directed most of it, as he did with his other 80s movies.

Joe: Thanks for the heads-up on the screenshot and the your assessment of this one. The picture is now fixed. I think we thought he was invincible because of the steroids! Haha.

Roger: That's awesome you have a Rambo t-shirt! Haha, he probably did direct it.

I'm not sure the comments about the direction are accurate. Peter MacDonald has done some good interesting interviews about his work on this picture. For example, http://blog.tvstoreonline.com/2015/07/director-of-rambo-3-peter-macdonald.html

If you look at MacDonald's career he has an incredible CV. Possibly one of the great CVs of all-time. I'm sure Stallone had a huge input into the film, but if you read the interviews MacDonald was trying to bring his own ideas to this film.

And I don't think even Stallone was going to tell someone as experienced as MacDonald how to shoot an action scene.

Each of the first three films has its merits and clearly Rambo III is the least of the trio, but not by much at all. Each one is definitive in its own way and I never get bored of them. The death count in this film is beyond belief and the sheer classic absurdity of everything is too much to comprehend. God I miss the 80's and this era of action films. It's to the point where I can scarcely believe it happened, such is the sheer mundaneness and dumbed down culture we endure now. The iconic moment of Rambo and Trautmann going for broke in the final battle, with Rambo screaming 'fuck 'em!' is a landmark scene in cinema, just like his final speech in First Blood and his decimation of the commies with the helicopter at the end of Rambo II. This truly was the golden age of modern civilization.

Force Field: Spot on comment, totally agree with your assessment. We celebrate this era proudly and we're happy you're a part of it.

This one became my favorite Rambo film this past year when I revisited it. It's special. It has a very over-the-top 80's big budget cheesiness to it that none of the other films possess. And you're right, it's a helluva lot of fun. For that, this takes the top spot for me. Now time to revisit Part 4....

I'm sure MacDonald directed the action scenes. That's what Stallone chose him for, after all.

Roger: He definitely directed it. One of his other movies, Mo' Money is not bad at all. Has a pretty good action climax for a comedy.