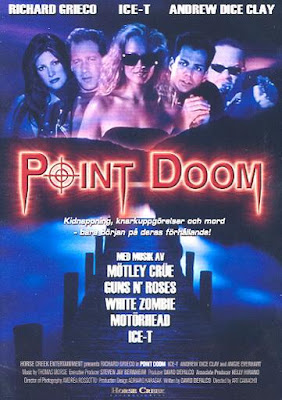 
Rick Hansen (Grieco) is a Hollywood talent agent lookin’ for love in all the wrong places - namely, the Play Pen, his local strip club. When he goes there to visit his buddy Frankie (The Diceman), the club’s owner, Rick is served by a waitress named Stephanie (O’Dell). Instantly enraptured by her, he essentially stalks her until she agrees to do a screen test for him. Unfortunately for the lovesick Rick, Stephanie is in an abusive relationship with a murderous biker named Blackie (Enos III), who has a mean jealous streak. He and his violent gang, the Satan’s Slaves - which includes Spider (Galligan) - have stolen some money and drugs, and their rivals, who include Ringman (Ice-T) and Slim (Sebastian Bach) want them bach. Sorry, back. As if all that wasn’t enough, Stephanie also lives with, and cares for, her epileptic sister Jessica (Everhart). Does Rick Hansen know the maelstrom of trouble he’s just walked into? Will things finally all come to a head at...POINT DOOM?

According to Wikipedia, “Point Dume is a promontory on the coast of Malibu, California that juts out into the Pacific Ocean. The point, a long bluff, forms the northern end of Santa Monica bay.” The mysterious elves that write Wikipedia entries might be more right than they realize, as Point Doom is indeed a long bluff, at an overlong 99 minutes - and we’re not sure what the point actually was. Once again, we’ve been snookered by what we call the Lone Tiger Effect - when you want to see a movie because of its great cast, but the movie itself is not so hot. It was directed by our old buddy Art Camacho (we don’t actually know him, but we feel as if we do because we’ve seen his name in the credits so many times), and, yes, it is a low-budget DTV movie from 2000. Our expectations should have been lower because of the latter fact. But let’s break this down:

- Zach Galligan - as a member of the Galligang, he plays a heavy and seems to be running from his past as a Gremlin wrangler.
- John Enos III plays almost the same role as he did in Missionary Man (2007), as the memorably-named Jarfe.
- Angie Everhart, like Galligan, stretches in an unglamorous role as a woman with medical problems who mainly wears sweatpants.
- Sebastian Bach  was a welcome and unusual presence and deserved more screen time. He must have been a “slave to the grind” of this particular production. Hmm.
- Ice-T had some funny and ridiculous dialogue, which of course was delivered in that inimitable Ice-Tean way.
- Richard Grieco is “Grieco Suave” as he plays the romantic lead - though in the “talent agent vs. biker” fight...well, we’ll let you guess who wins.
- Jennifer O’Dell - we don’t have much to say, other than that she wears some pretty outstanding outfits.
- Andrew “Dice” Clay steals the movie with his charisma, and is, funnily enough, the voice of reason amongst all the crazy goings-on. His thick Brooklyn accent is unmistakable.

The movie suffers from bad pacing - it starts off with a bang, but it didn’t know to quit while it was ahead, and some editing problems hamper things as well. Though on the bright side, there is a PM-style car flip/blow-up, and Enos rides his motorcycle in slo-mo away from the flames. Of course, there’s the time-honored barfight, but this one features a White Zombie song during the brain cell-depleting stupidity. Besides some of our favorite B-Movie names in unorthodox roles, Point Doom is also noteworthy in that it features some original songs by the original artists - Motley Crue, Motorhead, and the very catchy 80’s classic “White Horse” by Laid Back. But despite the cast and soundtrack, Point Doom is junky, too long, and needed a lot more pep in certain places. 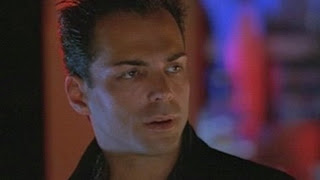 Much like Cape Fear, you'd have to be pretty brave to venture a trip to Point Doom. But if you've wanted to see Sebastian Bach shoot and punch people, this is the movie for you. 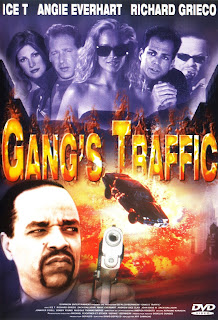 Camacho's directing career seems to have been headed for Point Doom ever since he made the classic Recoil. How did that happen? My guess is shrinking budgets. Your review is much too well-written for such a mediocre movie. Happy New Year 2017!

That's nice of you to say, Roger.

Thank you for being a loyal fan, it means a lot to us. Happy New Year to you, we have some fun movies and nice surprises coming up in 2017.

I recently read Sebastian Bach's autobiography and weirdly enough he never brought up his role in his film, I wonder why?

Good question. Would love to hear his take on it. Would've been interesting.