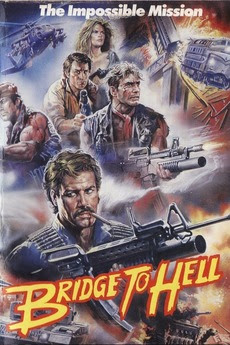 "I may be crazy, but I can smell the stink of Krauts!"-Rogers

Set primarily in Yugoslavia during World War II, Bridge to Hell is the story of Lt. Bill Rogers (Forest), a U.S. Air Force pilot who was shot down and escaped from a POW camp, and his compatriots Sgt. Mario Espozi (Mucari), and Blinz (Valente), a former German soldier who deserted and decided to join the good guys. Along their perilous travels to reach the allies in Italy, they end up teaming up with a small band of Partisans, including Vanya (Ferre). What ensues are a bunch of battles between our heroes and the Nazis, and not much else. There’s also a subplot about “St. Basil’s treasure”, and how to find it and what to do with it. Will our heroes finally reach the BRIDGE TO HELL, and if so, why would they want to cross it?

Bridge to Hell is a rather staid World War II actioner. It’s not a bad movie per se, but it’s run-of-the-mill and certainly not Lenzi’s finest hour. Lenzi was doing a lot of movies like this in the final third of his career, and nothing about Bridge to Hell stands out in any way. His prior movie, The Wild Team (1985),  is very similar, but instead of being set during WWII, it’s an exploding-hutter in the jungle. The main problem is that it’s all very samey – rural locations, various different missions that involve shooting, blowing up planes, blowing up trains, blowing up bridges, and stock footage of all of the above. Instead of just a bunch of random Nazis, there should have been one super-evil Nazi bad guy. As we’ve seen countless times before, when there’s no strong, central villain, the movie suffers, and Bridge to Hell is no exception.


Not that all the aforementioned shooting-and-blow-up missions are all bad – there’s a very cool train explosion, and it was nice to see our heroes dropping bombs on the baddies by hand from out of a biplane – but some more meat on the bone as it relates to character development, suspense, or surprises would have been nice.

Also in the win column are pre-political correctness bits of dialogue such as the above quote and the fact that Rogers consistently calls his Italian buddy “Spaghetti”. That’s his nickname for him, and not only does Espozi not care, it perhaps makes the bond between the two men even stronger. Okay, we might be reading into that just a tad bit too much, but we really hate political correctness. Also, they were in the midst of a war zone, so there were no “safe spaces” to run to. Literally.


For the 1989 U.S. VHS release on Cannon, they had their current star, Michael Dudikoff, do an intro to the movie, as they did for other titles in the “Action Adventure Theater” series. This intro is not included on the Inglorious Bastards 2: Hell Heroes DVD collection where Bridge to Hell can currently be found. The VHS tracking lines did find their way into the collection, however. In the end, Bridge to Hell is good-natured but dull, and not exactly a must-see.

Also check out a write-up by our friend, The Video Vacuum!

I completely agree. This was just another in a long line of WWII movies that seemed to clutter up the shelves of video stores in the 80s. Umberto Lenzi just died a few weeks ago, by the way.

We are in total agreement here. That's sad he just died. He will be missed, he's made some great movies.

Out of the 4 Michael Dudikoff Action Video films, this one is the weakest, it's just a bore for the most part and has little to none of the entertainment usually seen in a Lenzi film.

Looks like we're in agreement there. Thank goodness for the Dudikoff segments, or there wouldn't be much else.