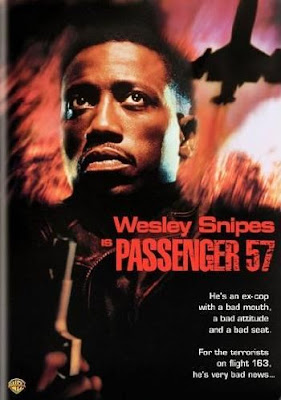 John Cutter (Snipes) is an airline security specialist. An expert in his field, he knows all the proper procedures should there be a terrorism incident on board an airplane. It just so happens Cutter is going to get to put his expertise to the test when he finds himself on a flight to L.A. with arch-terrorist and super-evil bad guy Charles Rane (Payne). Rane has a team of co-conspirators working with him, and he’s taken everyone on the plane hostage. He thinks he’s in control of the situation, but he didn’t count on one thing: Cutter, of course!

With the death of his beloved wife still haunting his mind, Cutter also feels especially responsible for protecting stewardess Marti Slayton (Datcher). While Cutter has compatriots on the ground such as Sly Delvecchio (Sizemore), Rane has quality baddie-ess support in the form of Sabrina Ritchie (Hurley). What follows is a battle of wits and fists as Cutter takes on the so-called “Rane of Terror”. Rane thinks he’s going to pull off his crime, and he just might, except for the presence of…PASSENGER 57. (Which is Snipes, not the little boy named Norman, just so we’re clear).

As roulette instructional videos go, Passenger 57 comes up aces. Hey, don’t tell us we can’t mix some metaphors around here. It’s “Snipes on a Plane” as a young and dynamic Wesley entertains us all with everything an action hero should have: witty one-liners and snappy dialogue, an ability to get out of sticky situations, and some quality Snipes-Fu. That’s right, all action heroes should engage in Snipes-Fu. Especially when it’s mano-a-mano combat with Bruce Payne-Fu. Importantly, these are two of the main ingredients that make Passenger 57 work: a strong hero and a central, nefarious baddie. You’d be surprised how often action movie-makers leave out these seemingly-essential ingredients. Thankfully, they’re present and accounted for here, and it’s all wrapped up in a classic-90’s framework. 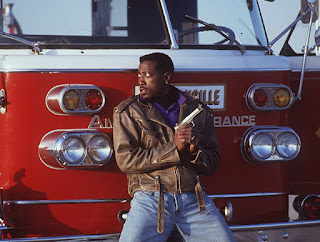 At 80 minutes, Passenger 57 is everything you want and very little of what you don’t. We applaud director Kevin Hooks and the writers – more movies should be 80 minutes. You can pack in plenty of great stuff, and P-57 is certainly never boring. The soundtrack is poppin’ bass and/or smooth jazz by turns, which you would expect when Stanley Clarke is providing the music. The opening credits montage is an assemblage of various objects, including cassette tapes, and there’s almost non-stop product placement for Pepsi. Rane has a classic “evil nerd” in his motley crew of evildoers, and, as you might expect, John Cutter is called “the best” at what he does. Transportation-based action was hot in the 90’s, as evidenced by this, Speed (1994), and…others. Interestingly, Speed was released the same year as Drop Zone (1994), a movie in which they decided to push Wesley Snipes out of the plane. Apparently the Hollywood suits wanted to see what would happen. 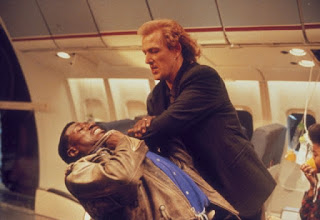 Co-star Alex Datcher was no stranger to action at this point in her career; we remember her from Rage and Honor (1992) – also notable as the same year as P-57 - and Jeff Speakman classic (?) The Expert (1995). It was also nice to see Liz Hurley in an atypical role, and fan-favorite Tom Sizemore is on board (the movie, not the plane) as Sly. It has been said he was named Sly because Stallone was originally supposed to play the Cutter role. Maybe John Cutter is related to Chuck Norris. This lame joke will make more sense if you click on the link. Also noteworthy, we think, is the usage of the name Charles Rane for the baddie. Fans of the great classic Rolling Thunder (1977) should remember that that is the name of William Devane’s character, as exemplified in the memorable tagline, “Major Charles Rane is coming home to war!” – presumably the writers were aware of this? Well, apparently not. We’re just big Rolling Thunder fans, that’s all.

P-57 may even have some nostalgic value to you if you remember seeing it at your local video store. Because it’s fast-paced and fun, we feel it has aged quite well. If you’re looking for classic 90’s action in a nutshell, watch Passenger 57.

I watched P57 in one of the biggest theaters in Helsinki, Formia 1, nowadays called Kinopalatsi. I agree that this movie has aged well. At the time, it seemed like just another Die Hard-themed movie. Today, very few action movies reach the quality of P57, and Snipes is stuck in dreck like Armed Response. The first time I watched an R-rated movie in a theater was in Formia 1, Highlander, when I was 14, and I will return there next week for the Night Visions film festival.

The real Armed Response is from 1986 and it stars Lee Van Cleef and David Carradine. Haha. The makers of this new one should've known that.

We agree, the quality of P57 holds up well. Poor Snipes, he suffered a setback after his unfortunate imprisonment. Let's hope he makes better movies soon.