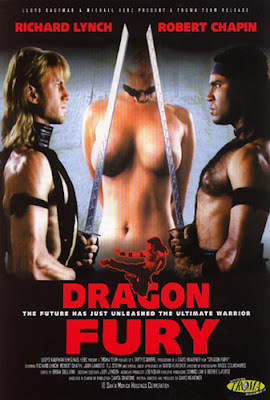 A swordsman from the future named Mason, who has attained the rank of “Dragon Warrior” (Chapin) travels back in time to the year 1999 to find a cure for a plague-ravaged world after the big earthquake kills most of civilization. While you might think that if it was invented in the past, they would have the serum in the future, you’d be wrong. So Mason and his partner Regina (Jason) end up having to fight a bunch of people, but the main baddie is Fullock (Storm). There’s also an emperor-like overlord named Vestor (Lynch), but his presence raises more questions than answers. Will Mason and Regina run for the cure? Will future populations be saved?

Dragon Fury had us asking the question, “where’s Joe Estevez?” It really seems like he should’ve been involved, but he’s nowhere in sight. Lack of Estevezness aside, this ‘Fury is junky, no-budget sludge that is essentially a cross between Future War (1997), Abraxas (1990), Peacemaker (1990), and a parent’s video of a child’s school play. It makes sense that Troma released this, because the way it’s filmed will make your eyes hurt, and it will likely annoy you. What doesn’t make sense is that the normally-dependable David Heavener directed it. It all, somehow, feels very un-Heavener-like. Maybe he was preoccupied with his one-scene “special guest appearance” where he plays against type as a nerd. Unsurprisingly, he was probably unsatisfied working on the production, which would explain why he didn’t return for the (inexplicable) sequel. Robert Chapin did, however.

Chapin, last seen in Comeuppance Classic Ring of Steel (1994), takes a step down here with this far more amateurish production. His lovely, lovely locks are still in abundance and they put the hair of most of the female characters to shame. While he’s not the only mulleted guy to be seen, his is truly king of them all. Perhaps that’s why he graduated to be lead Dragon Warrior. TJ Storm makes a worthy villain, and Richard Lynch is…here, but the movie is loaded with stupid, stupid stupidity that will make you feel stupid. Probably the highlights are the Skid Row fight and the Chinatown fight, and if you ever wanted to know what having a lobotomy might feel like without having to go through the time and expense of undergoing the surgery, watching these two scenes is likely the closest you’ll get.

There are irritating characters such as Milton (Loch), as well as some hooded ninjas, and a lot of silliness, and it’s a pretty unapologetic Terminator (1984) knockoff, but the good side is that it’s only 79 minutes. So at least it has the good sense not to waste too much of your time. It’s a prime candidate for the MST3K treatment (either by they themselves or you with your friends). Dragon Fury will make you yearn for the presence of Jorgo Ognenovski. And that’s saying something.

Also check write-ups from our buddies: Bleeding Skull and Fist Of B-List!

I completely agree. I expected more from Chapin after Ring of Steel, but his acting career never really took off. I guess there was a lack of demand for fencers in the CGI era. This was a very dull movie, long stretches of walking in nature, interspersed with short action bursts. If a movie makes you long for Jorgo Ognenovski, you know you are in trouble.

We expected more from Chapin as well. He set a high bar for Ring Of Steel. Chapin should make a comeback.

Dragon Fury was OK, but definitely not as fun as other Heavener outings such as Outlaw Force, Twisted Justice, Death Force, Prime Target, Eye of the Stranger, Ragin Cajun, Kill Crazy, Lethal Ninja and Fugitive X.

We definitely agree with you. Heavener usually delivers better.