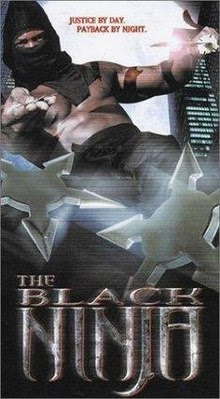 Directed by: Clayton Prince (AKA "ME")

Malik Ali (Prince) is a Johnnie Cochran-esque defense lawyer who specializes in charging his criminal clients an arm and a leg to get them off the legal hook. That’s his day job, mind you. At night, he’s the avenging superhero called THE BLACK NINJA. He even goes after the baddies he formerly defended in order to get street justice. At a speaking event, Ali meets Tracey Allen (Brothers), an attractive psychiatrist, and the chemistry is immediate. The only roadblock to their blossoming relationship is the fact that she’s a witness in the upcoming trial of mobster Tony Fanelli (DeMatteo), and Fanelli commands his goons to have her rubbed out. So Ali/The Black Ninja is going to have to protect her with all he’s got. Compounding Ali’s already-complicated situation is the fact that Hagiwara (Matsuzaki), a red ninja, has reappeared in Ali’s life after heinously killing his wife and children years before. Now burning for revenge, Ali has to look after Tracey as well. Will the streets ever be safe?

Watch out, Troy Nikolo Ashford, there’s a new auteur in town. While we know The Black Ninja was written by Clayton Prince, and stars Clayton Prince, the credits of the movie inform us that it was directed by “Me”. Who is Me? It truly is an existential question. It could be anyone, but we’re going to go with the working theory that it is Clayton Prince. 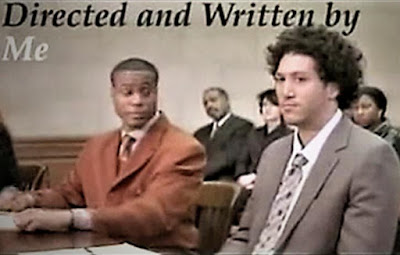 Like the aforementioned Ashford, Prince was able to make a full-length feature film with an apparent budget of zero, shoot it on video, and not only get it into stores nationally, but internationally as well. Let’s all keep that in mind and applaud Mr. Prince. Now, that being said, this is about as far down the ladder of DTV as you can get, production-wise. It has every technical flaw known to filmmaking, it’s incredibly cheap-looking, and it’s all astoundingly silly. But that’s all part of the charm. You have to watch this with other people to get the full effect.

Imagine Batman meets Daredevil meets RZA’s Bobby Digital meets Zorro shot on a home movie camera. The Black Ninja’s “command center” consists of a desk with two computer monitors, the guy who played the mobster baddie, Fanelli, was probably hired because he has a passing resemblance to John Gotti, and The Black Ninja’s main mode of transportation is a black Kawasaki Ninja. Seems appropriate. There’s even an unexplained fight scene at a Funcoland in front of a Sega Dreamcast display. However, just like The Protector (1999) and others, he does have a talking computer, which all true heroes should have.


The movie starts with a bang, and ends with a bang, but there are some stretches in the middle where it starts to sag. The opening credits look like they were created with Mario Paint and there’s a quasi-animated Black Ninja figure. The fight scenes are almost too ridiculous for words (much like the rest of the proceedings) – forget punches and kicks looking like they may connect someday, but whenever TBN (as we call him) executes one of his trademark moves, Prince employs this laughably stupid tripling editing effect. During the non-fight scenes, Ali talks to his dead wife (Hunter), and there is an extended scene of unfortunate bathroom humor. Det. Howell (Chance) livens things up with his attitude and his heckling, however. Matsuzaki as the main baddie is very over the top – and incomprehensible, with minimal English skills. It makes for an interesting combination.


Featuring an extremely catchy title song which seems to hearken back to 70’s Blaxploitation (most of the music was done by The BeatBrokerz and Clayton Prince himself worked on some of it as well), The Black Ninja might not be near the top of the most technically well-made productions of all time, but it pretty much defines the term “cheap and cheerful”. Seen in the proper context, it’s pretty enjoyable. Gather some of your fellow film fans, make sure the brewski’s are flowing, and it just may be the underdog crowd pleaser of the year.