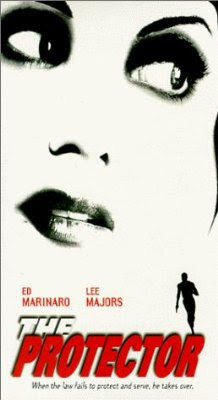 "When the Law Fails to Protect and Serve, He Takes Over!"


Following in the vein of the recently-reviewed Keaton's Cop (1988), here we have another "elderly actioner" featuring Lee Majors. Thankfully, here he seems to have lost some weight and the subject matter is somewhat less silly.

Following a ridiculous credits sequence that leads the viewer to believe this is going to be a new Lawnmower Man (1992), we are introduced to one John Templeton (code name: "Gabriel"), (Marinaro), a mercenary of some kind whose beloved wife was killed while he was away on a mission. Thankfully he has a talking computer named Gertrude who helps him through all of his troubles, and pretty soon it's "VR Marinaro" as he dons his Virtual Reality sunglasses which look like, appropriately, those big sunglasses old people wear. In true Robocop (1987) fashion, he revisits, through flashbacks, all the good times he had with his wife. After her murder, Gabriel formed his underground command center to help women in trouble from stalkers and scumbags everywhere. Think "super hero" meets Kick Or Die (1987) meets your grandparents.

Meanwhile, we are introduced to the relationship drama between Alex Johnson (Rodger) and Tony Angeleno (O'Reilly). Typically, at first Tony seems to be a great guy, but it is soon revealed he is an obsessive, psychopathic mobster. Isn't that always the way? So when Tony begins not just harassing Alex himself, but getting his gangster buddies to do his relationship legwork with Alex - and it spins horribly out of control with the senseless murder of Bob Newman (Christopher Heldman) - only one man in an all-green sweatsuit can come to the rescue - John Templeton of course! So "Gabriel" takes Alex under his wing, and as he's hiding her away in his abandoned warehouse/command center, he's also teaching her self-defense, how to shoot guns, and of course, the ways of love.

But a new wrinkle occurs when the gangsters hire Austin (Majors) to bump off Templeton. It seems they have a history together when they both did missions for the government. So now it's gangsters and former work associates vs. The Protector and Alex. Who will prevail?

Not just the front of the VHS box (a New World/Roger Corman release), but also the SPINE of the box (both sides) tout that ED MARINARO is involved. I guess they were really proud of this fact. Perhaps Robert Blake was not available. Not to disparage the man, of course. He acquits himself well in this low-budget and fairly strange movie. He must compete with Cyril O'Reilly as Angeleno, whose voice sounds exactly like Christian Slater's. Close your eyes and you could pretend Slater is the baddie in this movie. But then you'd miss all the "awesome" VR action. When there's a credit at the end of the movie "VR suit provided by Lone Star Scuba", you know you have a low budget production. Yes, the movie was shot in Texas, and yes, the VR suit looks like a scuba suit bedazzled with bottlecaps and twine, but why call undue attention to it?

He also had to compete against Lee Majors, of whom there is precious little in the film. The filmmakers thought it would be wiser to spend most of the running time on Italian stereotype gangsters.

When we watched the horrendous Digital Man (1995), we thought that would be the only time we would ever use the term "Virtual Ninjas". Well, we were pleasantly surprised when said ninjas appeared in The Protector. Now the phrase to beat is "Movie with a talking computer named Gertrude that has Virtual Ninjas and Ed Marinaro." It's not likely to appear as an answer on Jeopardy! anytime soon, sadly.

Thanks to some funny music stings on the soundtrack, homemade inventions like the VR setup and the "handprint" you need to get into the command center (do you honestly think John Templeton would use something as banal as keys?), A mob henchman that looks like Willard Scott (most of the cast looks like they're going to appear on a jar of Smuckers on the Today Show themselves), and a short 80 minute running time, The Protector is tolerable, but won't knock your socks off.