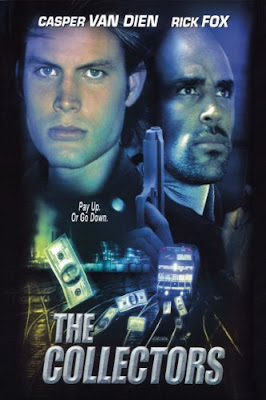 
A.K. (Van Dien) and Ray (Fox) are likable hitmen dispatched to New York City by a New Orleans-based crime syndicate in order to collect gambling debts from a bunch of non-paying customers. While in the midst of their mission, A.K. begins to question the course of his life and thinks he might be too much of a nice guy to be a hitman. Ray, the pragmatic and level-headed one, tries to talk him out of his philosophical quandaries. None of this stops the duo from getting into a whole heap o’trouble, as not only do they have to deal with degenerate gamblers, they have their enemies to deal with as well. Not to mention the fact that the police are hot on their trail, and no one is hotter than Detective Bailey (Oxenberg) – the officer that A.K. feels is in love with him because when she shoots at him, “she misses on purpose”! Will our unlikely heroes make it out of this mess alive?

Out of all the – as we call them – Tarantino Slogs to come out in the late 90’s/early 2000’s, The Collectors is probably one of the better ones. Van Dien and Fox make an engaging, if somewhat unlikely, pair and the movie overall is entertaining. But there’s a caveat (isn’t there always?) – you have to be tolerant of a very low-budget DTV look and feel, and also have no problem with post-Tarantino banter amongst the characters.

As audience members, we couldn’t help but warm to Van Dien as he has his crisis of conscience. He has Zack Morris-style sass and plenty of wisecracks that make him seem almost like a teenager. Despite the fact that there are shootouts and murders going on, he wouldn’t be out of place at Bayside High. Ray isn’t just his partner in crime, they’re also jogging buddies and they wear prominent fanny packs. They also drink a lot of Snapple and Pepsi and clink their Snapple bottles together to celebrate a good idea they both come up with. When they both appear on screen for the first time, wearing suits, sunglasses, and with sax blaring on the soundtrack, it’s hard not to think they look cool together. This is one of Fox’s first non-basketball-related movie roles, and he seems to make the most of it. As a basketball-playing man, he’s obviously much taller than anyone else he talks to on screen. He must have enjoyed returning to his native Canada to shoot this movie that takes place in New York City. 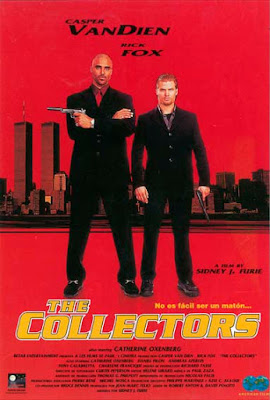 Speaking of sax on the soundtrack, someone must have decided that jaunty music must play at all times throughout the movie. ALL times. The WHOLE time. This undercuts any action (which is pretty minimal anyway) and any seriousness that may be remaining. But that may be the point: while The Collectors is clearly modeled after Pulp Fiction (1994), the overall tone is far sillier, with a bunch of wacky characters, nutty situations, and humor which works at some times but not others. Probably one of the more interesting facets of the movie was the love triangle between A.K., Ray, and Ray’s prostitute girlfriend Lyla (Francique), which is simultaneous with A.K.’s longing for Detective Bailey. Perhaps that could have been emphasized more, but then that would have left less time for the more audience-pleasing aspects elsewhere.

Maybe this is because it was Canada doubling for NYC in many places, but there is a very prominent sign with this misspelling: 9th “Precint”. This is the “Precint” that Detective Bailey operates out of. It’s surprising no one caught this, because “precinct” is a very French-sounding word, and they were in Quebec, after all. We do tend to point out misspellings in credits and such, because, not to be too nerdy about it, but it’s still hard for us to believe a film could be finished and released with no one catching these things. Ah well, c’est la vie.

In the end, we would say that The Collectors is more than watchable, despite some obvious drawbacks threatening to sink it completely.