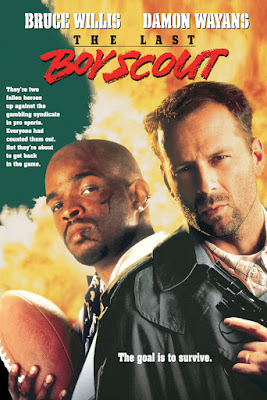 
Joe Hallenbeck (Willis) is a jaded private detective just trying to keep his family life together when he takes on the case of Cory (Berry), a stripper involved in a blackmail plot. When Cory’s boyfriend Jimmy Dix (Wayans), a former pro-footballer for the L.A. Stallions gets involved, the two unlikely partners become embroiled in a conspiracy that goes…you guessed it, all the way to the top. Along the way, they have to avoid many perilous situations, trouble from goons, and perhaps a surprise appearance from Dick Butkus. Will Joe Hallenbeck truly be THE LAST BOY SCOUT?

Shane Black for President, man. Shane Black for freakin’ President. That pretty much sums up our feelings for this great film, and if you haven’t seen it in a while, we say it’s time to revisit it. We guarantee you won’t be disappointed. The great Mr. Black was the writer behind Lethal Weapon (1987), and here he develops that style even more – it’s cool, it’s funny, it’s tough, it has action, it’s totally entertaining, everything works, and everything ties up beautifully. As a writer of intelligent, masculine movies, Black is the heir apparent to John Milius. We’re happy to give the movie this sort of enthusiastic praise.

It all opens with a slam-bang opening featuring fan favorite Billy Blanks, and never lets up from there. Even the accompanying video/song “Friday Night’s a Great Time for Football” by Bill Medley sets the tone well. Bruce Willis is at his absolute best as the burned-out, grizzled private detective - smoking heavily, spitting out un-PC dialogue, and engaging in the sort of witty repartee you just don’t see in movies anymore. Damon Wayans, also at his best, is “action Wayans”, and we should have seen more of that later in his career. Despite their supposed character flaws, both men remain likable, and the viewer is highly invested in their fate. 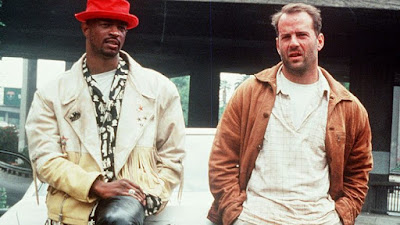 While the movie was allegedly beset by production problems and changes, it remains extremely coherent and you’d never know that if you didn’t read about it somewhere. If it’s this good as it is now, one has to wonder would it be as good if there was no studio meddling – or maybe better? We’ll never know, but let’s appreciate what we have. It’s also packed with many familiar names in the supporting cast, and although a lot of action movies feature a daughter, Danielle Harris as Hallenbeck’s daughter Darian has to go on record as the one with the most edge. She has a lot more attitude than the normal tot (she’s 13 in the movie but we tend to call them tots). There’s even a WYC (White Yelling Chief) to top off the overstuffed package of punching, shooting, chasing, blow-ups, plot developments, and clever dialogue.

Sadly, they don’t make movies like this anymore, but at least we have gems like this. What Shane Black has done is essentially fashion a Philip Marlowe or Sam Spade tale, but updated for 1991. The results are stellar, and we strongly recommend The Last Boy Scout, a movie that has proven itself over time to have reached classic status.

So right about the dialogue! Seems strange how some of these big budget movies seem to fade into hidden gems. Great reviews, this site has lots of solid recommendations

Can't agree more. This is an action classic with great quotable dialogue. Thanks for the kind words!

A stone cold classic. It doesn’t get any better. Some of the lines in this film had me rolling on the floor. Where did it all go wrong?