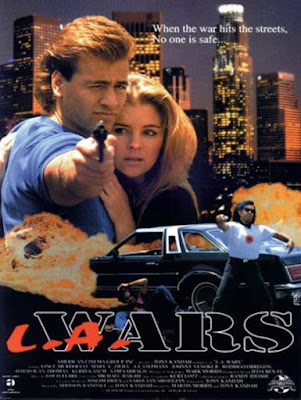 
Raul Guzman (Obregon) is a drug lord and snappy dresser who wants to be the ultimate gangster in the L.A. area. Sure, he has assassin Rosa (Kasem) on his side, as well as many other goons, and he has a penchant for brutal killings, but there’s a big obstacle on his way to the top. The area is controlled by the Italian mob, more specifically Carlo Giovani (Stephans). While he is a mobster, he is genteel and old-school compared to the more violent Guzman. Giovani has a bodyguard for his beloved daughter Carla (Zilba) named Vinnie Scoletti (Venocur), but he’s a psycho and madly in love with her. Carla doesn’t return his affections. When a former supercop and now superdude Jake Quinn (Murdocco) saves her life during an attempted kidnapping, Giovani hires him to now watch his daughter. Naturally, the two fall in love and the stakes become high. Especially because Quinn was promised his much-wanted badge back if he infiltrates the Giovani family and puts an end to the L.A. WARS. Is Quinn in over his head? Will the killings continue? Could Jake Quinn be any cooler? Find out today…

L.A. Wars is Vince Murdocco at his absolute best. If you’ve never seen any Murdocco, start here. Imagine if Zack Morris was an L.A. cop with an attitude problem. Jake Quinn has such a problem with authority, he lost his badge and is now a bouncer at Boardner’s Bar. No one tells Jake Quinn how to run his life. If they do, they’ll either get a smart-aleck response, or be elbowed and kneed mercilessly. Or both. He wears high-waisted pants so he can kick people more easily, and he’s a regular at Victorio’s Pizza. You have to love Jake Quinn. 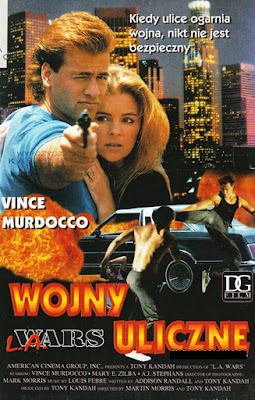 This movie delivers the goods for fans of 90’s DTV action movies. If you’re reading this right now, we assume that’s you. It has all our favorite stuff; everything that’s wanted or needed in a movie of this type is here: A BYC (Black Yelling Chief), a COTE (Cop On The Edge), a drug deal gone wrong, lots and lots of people get shot, more people get beat up, cars explode, there’s a ton of gratuitous violence, nudity, and bad language, there are drive-by shootings, one of the main Martial Arts baddies looks like a white Ice-T, Jake Quinn puts on his revenge outfit at the end, and there’s a final warehouse fight. WHAT MORE COULD YOU ASK FOR? We would say it has every cliché in the book, but that sounds too negative. For lack of a better word, we would say it has every TROPE in the book. It has every ingredient necessary to make a satisfying watch. There’s no way the formula used in L.A. Wars could fail. And it doesn’t.


This might be because the great and criminally-unheralded Addison Randall was the co-writer. Randall knows what’s up. He knows the score. We’re constantly talking about how much we love Randall’s writing, directing, and acting. He doesn’t get the attention he deserves in the movie-fan community. For all the talk of filmmakers from the current cult underground darling to the mainstream Hollywood people, no one ever seems to give Randall his props. Hopefully that will change in the coming years as movies such as L.A. Wars become more available on formats such as Amazon Prime. If you’re out there, Mr. Randall, contact us. We’d love to set up an interview.


Randall co-wrote the movie with co-director Tony Kandah, who has one other writing credit. Guess what it is. Just take a freakin’ guess. Well, it’s none other than Ballistica (2009), made fifteen years later. Kandah must wait for a truly great concept to come into his brain, and only then does he proceed to make the movie. Based on his only two writing credits to date, we must be talking about another unsung hero. Though, to be fair, not as much of one as Addison Randall, but still. Kandah must be an interesting guy to talk to as well. Another mystery is why Kandah needed a co-director, and one whose sole other credit besides L.A. Wars is the 1977 TV movie Alice Cooper and Friends. It doesn’t make much sense to us, but it must be another one of those Hollywood mysteries.


L.A. Wars is a ton of fun, and what 90’s DTV action is all about. We absolutely recommend it!

I completely agree. It’s almost on the level of the best PM movies, and that is not slight praise. Thanks for explaining why people had high-waisted pants in the 80s and 90s. Obviously, everyone was prepared for a fight to break out at any moment. Seriously, my self-defense teacher always tells me to check that one can kick with the pants before buying them.

That's some great advice from your teacher!