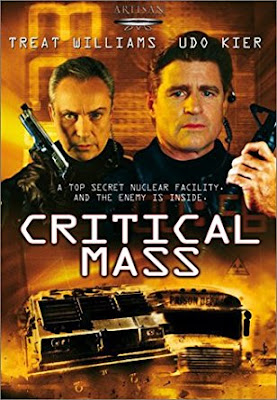 
Mike Jeffers (Treat) is a humble security guard at the San Miguel nuclear power plant. When the self-serving, vain Senator Cook (Prine) and his press secretary, Janine (Loughlin) arrive at the plant with a camera crew in tow for a tour of the plant, Jeffers is put in charge of said tour. There’s only one problem with the Senator’s jaunt – the arrival of a gang of international terrorists led by Samson (Kier) and his second in command, Rand (Fralick). They threaten to blow up the plant if their demands aren’t met. Naturally, that means Jeffers and Janine have to try, against all odds, to save the day. With no help from Washington, our heroes are alone in the face of overwhelming odds. Will they triumph, or will all of the sheer stupidity on show reach CRITICAL MASS?

Another day, another “DieHardInA” movie. These Die Hard (1988) knockoffs are so common in the DTV world, even ones set at nuclear power plants are a cottage industry unto themselves. For a more complete list of them, please see our Sudden Death (1995) review. This particular run-through of the classic Die Hard scenario is probably most similar to Deadly Outbreak (1995) and the Jerry Trimble outing Stranglehold (1994). It even borrows (?) the plot device of having a politician visit the facility before it’s taken hold of by the baddies. While we’re not entirely sure if director Fred Olen Ray saw Stranglehold, he’s certainly not afraid of borrowing ideas. Or footage.

It seemed to be common practice, starting in the early 2000’s as DTV movies started to go downhill, for filmmakers to borrow footage from other movies, particularly the bigger setpieces the lower budget versions couldn’t afford. It happened in Rangers (2000), it happened in Gale Force (2002), it happened in Extreme Limits (2000), and now it’s happening here. Anyone who has seen Terminator 2 (1991) or Universal Soldier (1992) will know when those scenes are intermixed with the more recently-shot stuff. Samson and his fellow baddies even steal their nuclear material from Cyberdyne Systems. Did they have to get permission to use that name? Isn’t that copyrighted material? Nevertheless, old footage of people shooting guns and blowing up stuff is interpolated with new footage of people shooting guns and blowing up stuff. Think of Fred Olen Ray as a bartender and here he’s making a cinematic Shandy. 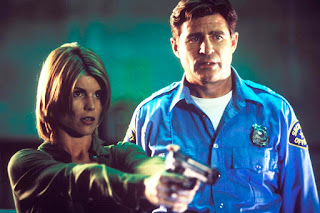 We love Udo Kier (or Udo Dirkschneider, or anyone named Udo), and he does his best, but of course he plays the typical Eurotrash baddie with an accent that means he’s evil. Just as Christopher Plummer did in Crackerjack (1994) or as pretty much any baddie has in any Die Hard knockoff. So that cliché remains unchanged. As has the “he’s just the security guard!” cliché, modified from Under Siege (1992) and its “he’s just the chef!” line of thinking.

Besides Critical Mass’s stubborn and out-and-out refusal to come up with any remotely original ideas, the main problem, really, is that it is repetitive and very, very dumb. Halfway through the movie you feel like you’ve been watching it for four hours because you’ve seen this type of movie so many times before in your life. It just starts to pile on at about that point. Even the great and mighty Treat Williams can’t salvage things. No one’s bigger Treat fans than us. He’s charming, likable, and a very capable hero. He’s even from the great state of Connecticut. But despite all that, Critical Mass’s monolithic wall of stupidity is just too all-encompassing for even Treat to surmount. 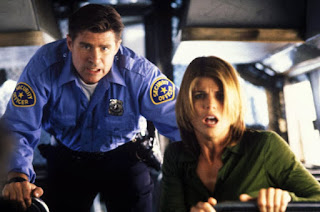 We were happy to see Lori Loughlin on board, and this is certainly a departure from Full House, and the other character actors are quite good, but come on…ANOTHER “DieHardInA”? We would say to the filmmakers churning out this crud: Give us, as viewers, a little more credit. Don’t you think we’re tired of the same-old same-old? Don’t you think we can handle something a little more challenging; something with a tad bit of originality? Are we really supposed to be going back to the same old slop again and again? On the bright side, though, the key to Samson’s world domination and nuclear supremacy looks like the inanimate carbon rod from that episode of The Simpsons.


Sadly, despite the actors that are on board who put forth their best, Critical Mass is a dud. It’s a prime example that DTV was out of its glory days of the 80’s and 90’s and had entered its period of doldrums.