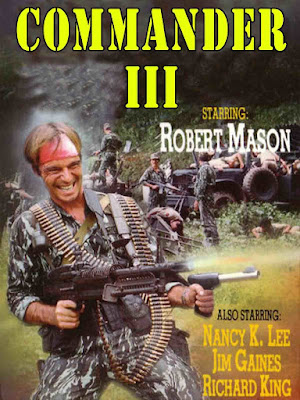 AKA: War Without End


It’s 1982 in Cambodia. Captain Ted Wilson (Marius), and his fellow soldier Lt. Garvey (Gaines), among others, are test-flying a technologically-advanced airplane named the Wild Weasel. Their platoon (or perhaps their mission?) is named Lickin’ Chicken. We repeat: Lickin’ Chicken. When things go wrong and the plane goes down, Wilson and Garvey manage to escape into the jungle – but is it the KGB who caused the plane crash? Or could it be someone else? The two soldiers find locals named Nooin and Nam, and they head off on a perilous mission to find answers. Of course, this involves almost non-stop machine-gun shooting and exploding huts. What will be the ultimate fate of Lickin’ Chicken?

Director Teddy Page takes us on yet another jungle excursion with all the shooting, blow-ups, and guard-tower falls you’d expect to see. While the movie does have a handful of cool moments sprinkled throughout, including a chain of well-timed consecutive exploding huts, it’s all a bit too mediocre for our liking. The movie isn’t bad at all, and fans of jungle-set exploding hutters who can’t get enough of that sort of thing could certainly check it out on Amazon Prime. It’s competently made, but it’s just not our favorite Teddy Page – which is, of course, Phantom Soldiers (1989).

Maybe it’s unfair to compare everything Page does to that gem, because he’s done a lot of other fine work as well, but this time he had a lot of people backing him up that are mainstays of the Philippines-shot action world – stars Marius and Gaines featured almost exclusively in these types of movies. Fan favorite Nick Nicholson looks great this time around as the shady, bearded KGB agent. Mike Monty, as Dr. Meehan, wears a rumpled sky-blue suit, which is a plus, but on the negative side we don’t think it was his voice doing the dubbing. Of course, when the movie goes from the jungle action to the military offices, there is not only a picture of Reagan on the wall (as normal), but also a framed Reagan pic on the desk. The rotary-dial red phone featured in the movie must be used to call him directly.

Now let’s talk about the Cambodian elephant in the room. While the movie is known as War Without End, it’s also called Commander 3. As readers of the site know, the original Commander (1988) is one of our favorites, and perhaps the best “explosion” movie of all time. How could a Commander 3 possibly measure up? Well, sadly, Craig Alan is nowhere in sight. Commander was an Italian production and Commander 3 isn’t. While we have nothing against Robert Marius, it appears Commander 3 is an in-name-only sequel, and the two movies have little, if anything, to do with each other. This supposed sequel doesn’t approach the majesty of the original, so if you haven’t seen either of them, make sure you see the first one first.


Commander 3 is not the worst exploding hutter we've seen, nor is it the best. It does feature a cool ending where Marius is brandishing a hand-held missile launcher in one hand and a machine gun in the other and is blowing up everything in sight. For those that can't get enough of the jungle genre, we'd say check it out, but for everyone else, perhaps not.