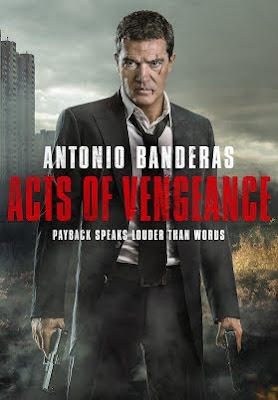 
"Words are opinion, not fact. Action is the only truth” – Marcus Aurelius [From Frank Valera’s favorite book]

Frank Valera (Banderas) is a hotshot defense attorney who has made a great living from putting criminals back out on to the streets. One night he gets so wrapped up in his work, he misses his daughter’s talent show, so his wife goes without him. By the time Valera gets there, however, he finds out tragedy has befallen him – his beloved wife and daughter have been murdered. After trying to ease the pain with alcohol, he realizes his “form of penance” can only be one thing – getting involved in underground Punchfighting matches, of course. But because he was a slick-talking lawyer his whole life, he doesn’t know how to fight. He just lets meatheads beat him up for a while as a form of physical and psychological punishment.

After the police chief, Lustiger (Schaech), and Officer Strode (Urban) both tell him the case of his wife’s killer has gone cold, he then decides to turn his garage into a gym, work out relentlessly, and take Martial Arts classes. After some baddies beat him up one day, he ends up sopping up his blood with a book of Marcus Aurelius quotes. Valera notes that he was one of the original Stoics, so he decides to become a stoic himself, refusing to talk until he enacts his ACTS OF VENGEANCE. When he stops talking, he gets a form of super-hearing. With the help of Alma (Vega), a friendly nurse, will he fulfill his mission? Or will he stay mute forever?


Finally, Antonio Banderas has a movie appropriate to be reviewed here on Comeuppance. And he teamed up with Isaac Florentine, no less. Banderas probably saw what was going on with the whole so-called “Geri-action” trend with the likes of Liam Neeson, Sean Penn, perhaps Bruce Willis, and others. So he must have figured that if he ever was going to get in on that action (no pun intended), and show the world he is a viable action star and not simply someone who is getting older, now must be the time. Thankfully, Banderas acquits himself well and does indeed show he can fight, and he executes his moves on the baddies with the best of them. 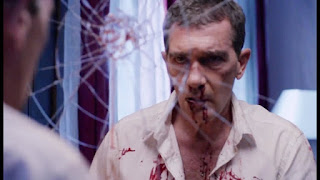 We liked the whole concept of the Stoic (though the idea of a largely non-verbal hero can be traced back at least to Clint Eastwood’s Italian Westerns), but luckily for the audience, Banderas does indeed speak for about the first half of the movie, and he also narrates the whole thing, so we’re never deprived of his inimitable voice. It’s about time Puss In Boots started punching, kicking, choking, and breaking the arms and legs of his opponents.

The great Robert Forster has exactly one scene in the movie, but it is a good one. We liked what he said to Banderas in the scene, and it’s important to the plot, but we really wish he had more to do here. Plus, the whole film has that made-in-Bulgaria look that all modern-day action films seem to have now. The dead giveaway is the stagey, artificial outdoor art direction, with signs that look too clean, and sets that look like a Bulgarian backlot. We also feel that the title Acts of Vengeance is somewhat of a misnomer, and they should have gone with the original working title of Stoic. If they did that, it would have made more sense plotwise, and it would have set it apart from other films of this ilk (of which there are plenty).


So while we appreciated Banderas doing his Martial Arts moves on the bad guys, and the movie is not bad overall, we feel that it’s not one of Florentine’s stronger showings. The combination of Banderas and Florentine should have produced something grittier, tougher, and with more actual acts of vengeance. But as it stands, it’s a pretty enjoyable one-time watch.

This movie suffered from a lack of action. Perhaps someone could find Teddy Page and have him co-direct dreary contemporaneous ”action” movies?
The joining a punchfighting ring whenever you have psychiatric problems angle was interesting. We need a Dr. Phil-like person for this. We could call him Dr. Punch.

Would love to see a Dr. Phil punchfighting movie! That would be hilarious.