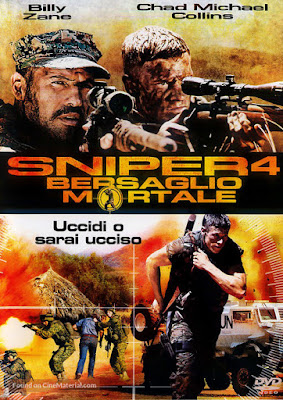 
Brandon Beckett (Collins) is legendary sniper Thomas Beckett’s son. His latest military assignment is to go to the Congo in Africa with his platoon, train the locals in the ways of war, and provide help to a farmer who is caught in the crossfire of a local civil war. While in the midst of their service, a sniper opens fire upon them, many people are killed, and Beckett just barely makes it out alive. While he desperately wants revenge, he first has to learn the ways of sniping from Richard Miller (Zane), which Beckett is initially against doing. Meanwhile, he finds time for romance with Lt. Ellen Abramowitz (Wright). He is later interrogated by her and her compatriot about the mission, but there may be one last off-the-books assignment Beckett has to undertake in the ongoing battle against red tape…

The Sniper series returns after Sniper 3 (2004), and following this seven-year break, it is indeed “reloaded” for the modern-day DTV generation. That’s exemplified by first-person-shooter-style shots on the guns that make it seem like they attached a Go Pro camera to them. Call us old fashioned, but we miss the 90’s style “bullet time” effects employed in the golden age. To be fair, something like that is also attempted here. We won’t use the term (as we have many times before) Africa Slog to describe this movie, but it teeters dangerously close at times. The main reason for that is that we, as the audience, don’t know who the villain even is until the movie is almost over. The baddie should have been more clearly defined – or defined at all -throughout the bulk of the film. It doesn’t help that new Beckett Chad Michael Collins is a bland, featureless hero that the audience never really warms to.

Of course, there’s plenty of shooting on display, and a lot of military jargon is thrown around. There seems to have been an attempt to make things quite serious-minded and the result is that there are many more dour moments than there should be. The level of audience engagement goes up and down but mostly stays down. The female lead was firmly in the Sienna Miller/Naomi Watts/Nicole Kidman camp, and why she would be interested in the charmless lunkhead that is Beckett remains unexplained. 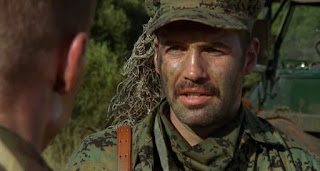 Of course, we were on Billy Zane watch. Just like we are in our everyday lives. He doesn’t show up until 40 minutes into the movie, but when he finally does arrive, things perk up a bit. There’s no question that he enlivens the proceedings. We’re not entirely down on this movie – as we said, things fluctuate between the duller moments and some genuinely cool scenes. We won’t spoil them for you, but they’re certainly there. Somewhat ironically for a Sniper movie, things are hit or miss.

One of our favorite moments came not during the more violent episodes, but when Beckett shows his sensitive side. During his mission, he rescues a young girl who looks to be about 12 or 13. He generously buys her some Jonas Brothers and Michael Jackson DVDs, but she despairingly sighs that she can’t play them because they’re Region 5. This scene stood out to us because it showed some interesting humanity and presented a situation we can all relate to. This almost throwaway moment showed that the filmmakers were capable of something more. Maybe in the endless series of sequels, we’ll see if that’s the direction they prefer to go. I have to say, we have our doubts…

Featuring the song “Tear It Up” by a band called White Demons (which only appears during the end credits but should have been in the movie itself to provide some energy), Sniper: Reloaded is something of a mixed bag but seems to err on the more run-of-the-mill side of things.

Comeuppance Review by: Brett and Ty
Posted by Ty at 7.1.19