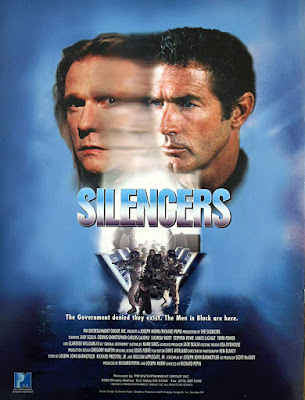 
“Is something wrong, Comdor?” – Bobby

Rafferty (Scalia) is a U.S. Secret Service agent. When evil aliens from another planet assassinate the Senator he was assigned to protect, he gets deeper into a governmental conspiracy than he ever dared to before. Evidently, the Senator knew too much about alien technology that is being negotiated and sold to Earth, the main proponent of which is General Greenboro (Williams III). Sinister Men In Black are making sure their investment isn’t compromised, and they’ll go to any means necessary to ensure that. When Comdor (Christopher) comes to Earth from the Pleiades, he ends up teaming up with Rafferty to fight the evil Marcabians. But the important thing to note is that what follows is an almost non-stop barrage of action scenes that aim to please the viewer. Just who are THE SILENCERS? Find out today!

PM turns in yet another winner with The Silencers, a completely fun outing that delivers the goods. Probably figuring that their classic action formula was getting a bit repetitive (though if they kept up with it, that certainly would have been cool with us), the PM crew decided to keep the shootouts, stunts, fights, blow-ups, and car flips that they are renowned for, but give it a sci-fi twist. 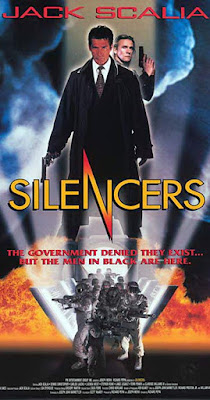 They were obviously influenced by the big-budget Hollywood hits of the day – there’s even a full-fledged, unapologetic Stargate in this movie for God’s sake – but it must be said that they predated Men In Black (1997) by one year. We’re constantly saying how the world of lower-budget, independent filmmaking is at the forefront with their ideas because they have to be. Hollywood always lags behind, and here is no exception. But here the MIB’s are evil baddies. It’s almost like the government stepped in and told Hollywood to whitewash the image of Men In Black and make them likable and cuddly like Will Smith and Tommy Lee Jones. Now why would they want to do that? (Hey, watching The Silencers made it fun to put on our tinfoil hats for a while).

Seeing as how The X-Files was one of the hottest shows on TV at the time, PM decided they wanted to get in on that action. We’re not sure which movie came first in their production schedule, but that same year’s Dark Breed (1996) – another sci-fi/action hybrid starring Jack Scalia – was also released. However, The Silencers features Scalia at his absolute best. He bellows “Nooooooooo!!!!” with the best of ‘em (not once, but twice), tells his compatriots that “we’ve got company!”, gets into gunfights with aliens, befriends other aliens, and also is a caring father torn by the demands of his job. He’s usually in motion – sliding, running, driving, being pulled up a chain, or otherwise in the midst of other physically-demanding events. He also makes funny noises when he’s under pressure. He’s a great everyman action star.


So, it’s perfect he’d be teamed up with Comdor. They’re the original odd couple! Not since Jay Leno and Pat Morita were, and we quote, “as different as hot dogs and sushi”, has a law enforcement duo this different come along. It must be said Dennis Christopher does a great job as Comdor. He’s playful and childlike, yet wise. Almost like an extraterrestrial Teddy Ruxpin. Rafferty and Comdor are both likable in their own way and they make a winning team. You gotta love it.

So if you love that action/sci-fi style – and The Silencers is seemingly influenced by everything from The Terminator (1984), to Peacemaker (1990), to I Come In Peace (1990) (that phrase is even said in the movie, as if the comparisons weren’t obvious enough) – this is a great example of action mixed with sci-fi at its best. And not that it needs to be said again, but here goes: our hats go off to the utterly amazing stunt and pyrotechnic teams that put together the fantastic stuff we see on screen. In the good old days of pre-green screen and pre-CGI, actual people had to create actual destruction. It’s very impressive. We never fail to marvel at not just the work involved, but the final payoff when the cameras roll.

For a totally entertaining night of VHS fun, do check out The Silencers!

The Silencers and Dark Breed are both solid Pepin-PM X Files-inspired actioners. According to imdb, Dark Breed was released six months after The Silencers. Around this time, unfortunately, PM began to run out of speed, finishing off the 90s with movies featuring loads of stock footage from higher-budgeted action movies.

Agreed, very sad they had to resort to stock footage. They still had an amazing run in the 90s.