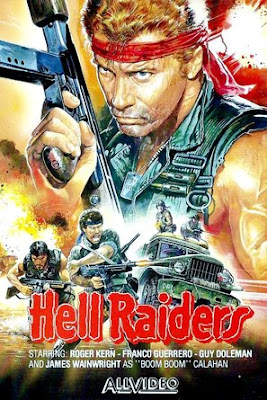 There’s some microfilm that everyone is after. Professor Arlington (Monty) has it, and to keep it extra safe and secure, he gets surgery so that it is implanted deep in his arm. We’re told via an on-screen title card that this happened in MIAMI, 1980. Shortly thereafter, we see another on-screen title that reads FEW YEARS LATER. Arlington is at a party wearing nothing but a Speedo. Armed terrorists, led by Charles Barner (Marius), crash the party and kidnap Arlington and his wife Liza (Liza Hutton). Of course, yet another evil baddie, Escaler (Hahn), is also after the microfilm.

It seems – at least at first – that only one man can stop the chaos: McPearson (Baron), a man who by turns is either sullen and belligerent, or energetic and lively. Evidently McPearson is going to need extra help, so his boss goes to an organization called Heroes For Hire. It’s there that more heroes are brought in: Magnum (Beyer), the Clint Eastwood guy, Cactus (Holtz), the Cowboy guy, and Ninja (Chang), the ninja guy. Now an unstoppable fighting force, the HEROES FOR HIRE will use their combined strengths to fight the baddies…but will even that be enough? Find out today…

We’ve got a winner on our hands with Heroes For Hire (AKA Hell Raiders), a fun and absurd romp that sports some really outstanding moments. There are five John Lloyd movies, and of the ones we’ve seen to date, so far this ranks as the best. It has an extremely high kill count mixed with the silly moments we all love and enjoy.

It features most of the Philippines-shot action movie mainstays such as Mike Monty (looking especially like Bryan Cranston here), Nick Nicholson (in a tiny part as Berenkov), and Jim Gaines, also in a cameo role, seemingly only placed with Bruce Baron on a boat to further reinforce – as if it were necessary – the Crockett & Tubbs vibe. It truly was the era of Miami Vice – absurdly, the movie even takes place in Miami – and McPearson (or is it Bruce Baron?) truly Crocketts it up with his sports jackets with the rolled-up sleeves worn with a T-shirt, and topped off with Ray-Bans, which he consistently wears indoors just to show how cool he is. Even in the less Crockett-esque moments, Baron more than shows that he’s a crafty, resourceful, and capable hero. 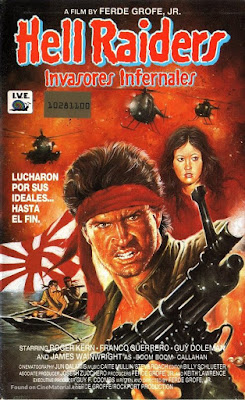 The movie really takes off at the midway point, at the introductions of Magnum, Cactus, and Ninja, which in itself is a highlight. That being said, we wish more thought had been given to the name of Ninja, but perhaps that’s all part of the charm. Once the Heroes For Hire assemble, it’s truly a joy to watch what ensues. We don’t want to give anything away, but let’s just say a lot of people die, McPearson’s boss has the prerequisite framed Reagan photo on his desk, we’re informed that Barner was formerly in Vietnam, and there’s a hilariously truncated chainsaw fight. Also Arlington’s wife calls him both Fred and/or Ted at various different points throughout the film.

We noticed that a man named Lincoln Abraham played a helicopter pilot in the movie, and also was the still photographer behind the scenes. He was probably included solely for his name, which looks like a typo. There are also crew members named Larry Byrd and George Will. Are these real people, or Filipino locals using anglicized names? We may never know. The important thing to remember is that you will have a lot of fun watching Hell Raiders.

Final thoughts: Heroes For Hire is one of the better non-Vietnam-based, Philippines-shot low-budget actioners we’ve seen in some time. As of this writing, it’s on Amazon Prime and we say check it out.

Comeuppance Review by: Ty and Brett
Posted by Ty at 1.1.19

If these are the Heroes For Hire, where is Power Man and Iron Fist? Anyway, John Lloyd’s movies are usually solid. You should check out Double Edge with Romano Kristoff.
Happy New Year 2019! As always, thank you for one more year of interesting, excellent and humorous reviews. I check your website every day for new material.
I bought a set of rare VHS to watch during the holidays: No Way Back (Fred Williamson), Bloodfight (Daniel Greene), Riverbend (Steve James), Intrusion: Cambodia (Richard Harrison), Firebird Conspiracy (Mike Monty, etc), War Without End...
In the set was also a curiosity; an American, New Orleans-based low-budget 1930s-set gangster flick from 1984 called Mob War, which is not even listed on Imdb. When one finds something not listed there, I guess one has finally reached the bottom of the barrel of VHS tapes.

With cover art like that you can not go wrong! This looks good might have to check it out.

I'm definitely going to check out this movie. I've only seen Bruce Baron in Godfrey Ho movies, but after reading this review can't wait to see him in this. This movie sounds awesome.

Roger: Thank you, Happy New Year to you too! We appreciate your comments throughout the year. Our Double Edge review is coming soon in mid-January. That's sounds like a killer score of VHS. They all sound like fun movies. If you learn anything about Mob War, feel free to get back to us. :-)

Bob Johns: Definitely worth a watch and it's on Amazon Prime. Easy access.

Joseph: It's a lot of fun and hang in there till the midway point when the movie really picks up.