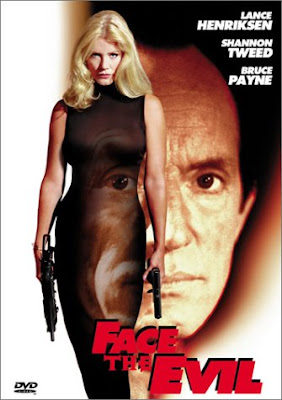 AKA: No Contest II


When actress Sharon Bell (Tweed) goes to visit her sister Bobbi (Heitmeyer), a curator at the Holman Gallery, at said art gallery, it’s not going to be a dejeuner sur l’herbe. Not at all. You see, a group of terrorist baddies under the command of Eric Dane (Henriksen) has – you guessed it – taken over the gallery. Part of their plan for world domination involves a highly potent and toxic nerve gas and the key to unlocking its potential lies in the art gallery. But rather than submit to these goons, Sharon and Bobbi – along with gallery worker Jack Terry (Payne) – decide to fight their way out of the situation. After all, Sharon is an action movie star, not to mention she’s been through all this before…


When the world cried out for a sequel to the Shannon Tweed-Andrew Dice Clay Die Hard knockoff No Contest, director Paul Lynch answered the call. Just why it’s called Face The Evil in the U.S. when in most other places it’s called No Contest II (its production company was named NCII Productions, not surprisingly) isn’t really known, but it doesn’t matter. Out of all the “DieHardInA” movies we’ve seen to date, we can honestly say this is the first one to take place in an art gallery. It’s easy to see why filmmakers used this formula so much in the 90’s – most of the action takes place in one location so it’s relatively easy and inexpensive to shoot one of these things. “Sequel to No Contest? Sure, what the heck, why not?” 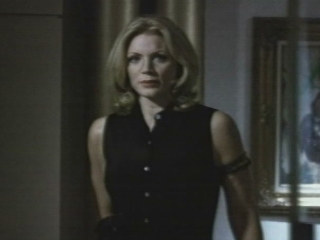 One notable element this movie has that its predecessor did not is the employment of some horror elements. Perhaps that’s not surprising, as Lynch is the director of 80’s-horror fan favorites Prom Night (1980) and Humongous (1982). He tries to inject some style as well, and the fact that at least one person dies by a sculpture would seem to indicate Mr. Lynch has been watching his Dario Argento, especially The Bird With the Crystal Plumage (1970) and Tenebre (1982). However, if this floats your boat, don’t get too excited. The vast majority of the movie is standard Die Hard stuff. Yes, there are some shootouts, fights, a throat slash, and the time-honored catfight between Shannon Tweed and some other chick. Even though some of the practical effects are well-executed, they’re not front and center here. 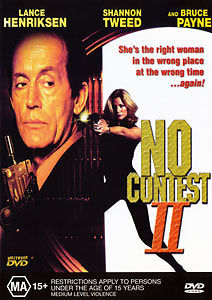 The whole thing has a somewhat campy, “we’re not taking this entirely seriously” vibe. There’s also a lot of stupid/childish dialogue. And it’s really obvious it was shot in Canada. Even still, Shannon Tweed was probably psyched to not have to do yet another “erotic thriller”. She doesn’t take her clothes off and she’s the action heroine. She even gets to show off her comic timing. As crazy as it may sound, she probably wanted to do more movies like Face The Evil. As much as we enjoyed the team-up of Tweed and Heitmeyer, why has no one ever made a movie where both Shannon and Tracy Tweed are sisters who have to bust the heads of the bad guys? It’s too good of an idea. And in true Batman (1989) style, the baddies deface priceless works of art with spray paint. Perhaps they should have called the movie “Deface The Evil”? Groan.

While it was nice to see Tweed, Heitmeyer, Henriksen, and Payne working together, is it really worth going out of your way to track down and watch Face The Evil if it isn’t readily at hand? Two words: No Dice.