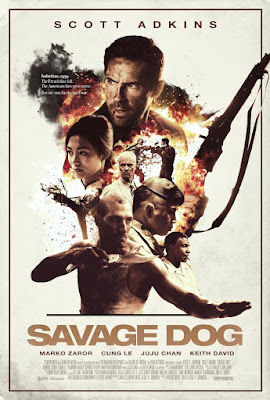 Martin Tillman (Adkins) is an Irishman and expert fighter. His rise to the top of the fight game is severely hampered by the fact that it’s 1959 and he’s in an Indochinese forced-labor camp. So he survives the only way he can - by becoming the number-one champ in the brawls that are held within said camp. These fights are held outside, so all the locals can see them, and Tillman becomes extremely popular. So much so that when it comes time for him to be released, the cadre of baddies that run the camp – Rastignac (Zaror), Steiner (Kulich), Boon (Le), and Amarillo (Fathy) – don’t want him to leave. Of course, Tillman does indeed get out of there but he stays in Indochina to work at a bar run by his buddy Valentine (David) and his wife Isabelle (Chan).

Naturally, trouble starts when the baddies don’t leave them alone. After something happens (we won’t say what; no spoilers here), Tillman is forced to go on a rampage of revenge against his former captors. As if all that wasn’t enough, he’s also being trailed by a British government agent named Harrison (Marsden) for his supposed former connections to the IRA. Luckily, Tillman was trained to fight locally by a Tribal Chieftain (Aleong). Will Tillman get revenge and show he’s a SAVAGE DOG for the last time?

Thank goodness for Scott Adkins. He really is keeping the flame of the golden age of action cinema alive and burning. If it wasn’t for him, where would we be today? We’d have to fall back on the films still being made by the prior generation of action stars that are still working. Not that that is such a bad thing, but, let’s face it, Adkins has the vitality that some of the older guys naturally are losing over time. It’s fun to watch Adkins because he’s likable and has killer Martial Arts abilities. That formula is necessary for a truly great action star, so it’s no wonder he works so much in the DTV industry. He’s one of the very few men of action out there still left, so of course filmmakers are going to use him if they want to make this type of movie. 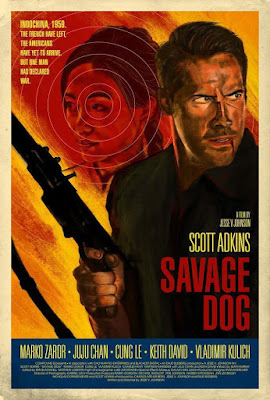 While Savage Dog is indeed a Punchfighter/Revenge Movie, we applaud the filmmakers for at least giving it a setting that is different – the fifties and the former Indochina. That was a nice change of pace. Adkins and David have a nice chemistry together, and the fights overall are executed very well. The whole second half of the movie is simply Tillman getting revenge. That’s what’s good about DTV as opposed to Hollywood – you know they aren’t going to wuss out and revenge will be appropriately violent and bloody.


Nowhere is that more true than here in Savage Dog. For whatever reason – maybe it’s to further separate itself from its competitors even more so than its chosen time and place – writer/director Johnson decided to go not just with the standard action violence, but gore as well. While we certainly weren’t offended by it, it just seemed a little unnecessary. Rather than have limbs and heads being graphically chopped up and mutilated, maybe they could have concentrated a little more on the final fights between Adkins and Le and/or Zaror. If they extended each fight by 30 seconds instead of gore-ing it up, that would have fit the bill just fine. But as it stands, it makes Savage Dog something of an oddity.


A movie that surely lives up to its name, Savage Dog is perfect for Adkins fans, and nicely narrated by David. We say check it out.

I completely agree, Adkins is definitely keeping DTV action alive, and Savage Dog is a solid movie. Just avoid Incoming, because it’s not in the same style nor as good as as his other starring movies.

Can't agree more about Adkins! Appreciate the heads-up about Incoming. That's unfortunate it's not very good.