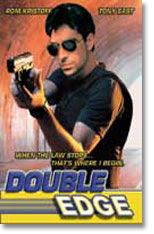 “This is where the law stops…and I come in.” – Mark Quinn


When the super-evil baddie Jack Maraccio (East) kills his parents, a young tot named Mark Quinn vows revenge. Now a tough, no-nonsense, doesn’t-play-by-the-rules cop, Mark (the awesome Rom Kristoff) is cleaning up baddie scum wherever he finds it. Along with his partner Ty Jackson (Moss), the two hero cops make sure no criminal in The Philippines is safe. While still on his mission to avenge his parents, a new and unforeseen element appears…a mysterious ninja. Will Quinn fulfill his destiny? Or will it be a DOUBLE EDGE-d sword? Find out today!


Fun and silliness reign supreme as unsung auteur John Lloyd delivers another gem. If nothing else, Double Edge just goes to show how massively popular Sylvester Stallone was in 1986. Lloyd even includes a Rambo: First Blood Part II (1985)-style torture sequence and a Rocky-style training sequence just to prove the point, as if that was needed. And if that wasn’t funny enough, at some point the movie remembers that the Ninja Boom was in full flight at that time as well, and the whole thing blurs from a pastiche of Stallone films into a full-fledged ninja extravaganza. You don’t see that every day.

As would seem to be obvious from the box art, the main influence (or should we say reason for this movie’s existence in the first place) is the great classic Cobra (1986). Double Edge even beat the similarly-inspired Black Cobra (1987) to the punch. And if you’re going to make a so-called “rip-off”, you might as well rip off the best. While some scenes are lifted wholesale from Cobra – and if you’ve ever wanted to see a low-budget remake of Cobra from the Philippines, now’s your chance – when all the elements are mixed together, it’s plain that a new, mutant beast is formed that transcends its humble origins. In other words, Cobra doesn’t have a ninja.

Another hilarious thing about this movie is how hysterical everyone is. Outside of Mark Quinn and Ty Jackson (who are much too cool to ever fly off the handle), just about everyone else launches into fits of histrionics at the drop of a hat. While no one could ever supplant the masterful John Miller, some incidental characters here are in the same ballpark. Consequently, we get one of the best WYC’s (White Yelling Chiefs) ever in Donahue (Anderson).

Mark Quinn (or perhaps Rom Kristoff) wears his sunglasses most of the time, even at night in true Corey Hart fashion. Perhaps because it was decided that the shades make him look more like the poster for Cobra. Not Stallone, the Cobra poster. The great Jim Gaines takes on a rare baddie role here as a pimp named…you guessed it, Sly. It’s hard to imagine a movie not connected in any way to the real Stallone featuring this much Stallone worship. For that reason alone, this movie is a ton of fun to watch, and then you add in the histrionics and the ninja, and you’ve got something truly special.

Prepare yourself for the ultimate – and original – ROM COM as Rom Kristoff blows you away!

FINAL NOTE: Footage from this movie was later interpolated into the later Rom vehicle Lethal Killing Machine AKA Crime Stopper (1990), so if you can’t get enough Rom, just know there’s always more Rom to be had.

This is a solid movie. Even better Kristoffs are Jungle Rats, Slash and Angel In The Dark. I wonder how many people have actors like Romano Kristoff, Jim Gaines and Mike Monty as household names? Well... here we are.

Funny observation, they're definitely household names to us too! We have a review of Slash coming soon. We aren't familiar with Jungle Rats or Angel in the Dark, but we'll try to track them down.