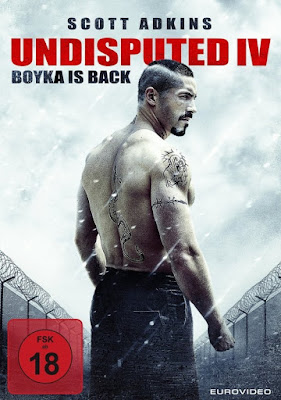 
Boyka (Adkins) returns after a six-year absence in this fourth installment in the Undisputed series. At this point in his life, Boyka has found religion and he spends his time and money at the local church. However, he still lives to fight. This causes tension between not just Boyka and his friend, the Priest (Mihailov), but within himself as well. When Boyka’s agent informs him of a big tournament in Budapest that all his fans, and the media, are waiting for, Boyka senses this will be a big opportunity for himself, so he gets all hyped up. So much so that he accidentally kills his opponent in the ring in the qualifying match for the big show.


With his conscience weighing on him, he makes a dangerous and illegal journey from the Ukraine to Russia to meet his now-deceased opponent’s widow, Alma (Duhovnikova). He tries to tell her how sorry he is, and he attempts to give her his fight winnings, but it’s tough going for them both. The sad part is, Alma needs the money. She’s deeply in debt to local crime boss Zourab (Aboutboul) because she used his money to build a community center where all the children go. She can’t escape because then she’d be letting the children down. She’s slowly working off her debt to the unscrupulous baddie by waitressing at the club where, of course, there are fight tournaments.

Boyka approaches Zourab and offers to fight in the tournaments to pay down Alma’s debt for her. All the while, the pressure is on because he has to get to Budapest for his big chance. But first he has to get past terrifying man-mountain Koshmar (Ford). Now that Boyka has found redemption with the Lord, will he find redemption with Alma? 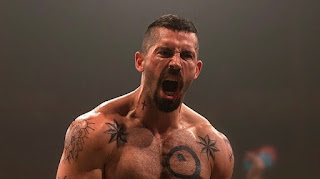 With Undisputed IV, we have a bunch of winning elements that all come together. Firstly, and most importantly, we have the great Scott Adkins putting in a terrific performance as Boyka. There is perhaps no other actor working today that could have done what Adkins does here. He has a great Ukrainian accent, his fighting skills are in top form, and there’s plenty of emotion as well. It’s rare that one person can embody both the impressive physicality and the inner feelings Adkins does here. It’s extremely well done. Then we have the other actors backing him up, who also put in fine performances, we have the plot, which allows for not just bone-crunching action but also the aforementioned emotion, and of course the fights themselves, which are very well-executed.

As far as the fights go, we can see all the moves and there isn’t all that fast cutting that can be found in many DTV Punchfighters. With Adkins, that sort of stuff isn’t needed – and, in fact, hinders what you can really see him do – and thankfully the filmmakers realized that this time around. A rather strange and unnecessary zoom effect is used in fight scenes and dialogue scenes alike, but it apparently isn’t used to hide anything, instead it seems to be a stylistic choice. Besides not being needed, it marked this out as being a modern-day DTV vehicle, but it didn’t hurt our eyes or anything.

Naturally, the word “Boyka” is said countless times throughout the movie. We could be in triple digits here, but we weren’t counting. Characters say it constantly, and crowds chant it repeatedly. It might be the most oft-said word on screen since Brakus. Or perhaps Malone. But, all kidding aside, Undisputed IV is a movie about redemption, and about how even if you’ve done unfortunate things in your past, you can always redeem yourself in the eyes of God or your fellow man. It’s never too late. Even the name of Alma gives a clue – it means “soul” in at least two languages, and Boyka himself gives alms to his church. This gives the film a certain depth and dimension that sets it apart from others of its ilk and it’s not just a marathon session of meatheads punching each other.


However, if that’s what you want, that is here as well. It’s truly a movie of multiple facets. Could this be the best Boyka film yet? Please write in to give your opinion. But one thing is for sure: the character of Boyka – as expertly interpreted by Adkins – has become so beloved because he’s a fighter with a heart, soul, and conscience. You feel his inner conflict between peace and violence. Somehow this speaks to us as action fans. We don’t want to see anybody on-screen – or be ourselves – one-dimensional. He even has his name above the title this time, and that’s no coincidence.

So, for a movie with a lot of brutal fighting – but also some depth backing it up – Boyka: Undisputed IV fits the bill perfectly.