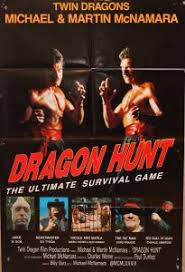 
Seemingly continuing on right after the end of Twin Dragon Encounter (1986), Dragon Hunt sees the malevolent Jake (B. Bob) and his merry band of thugs, The People’s Private Army (perhaps an oxymoron there?) pursuing their obsession with The Twin Dragons (Michael “Mic” McNamara and Martin McNamara). Angered at the twins’ forcing him to now have a metal hand, Jake is more off the deep end than ever before. He recruits mercenaries and soldiers of fortune from far and wide and offers them 200,000 Canadian dollars if they can kill the twins. This Game becomes Most Dangerous when the twins are indeed kidnapped and caged, but then set free in the wilderness so they can be hunted by everyone from ninjas to overalls-wearing good-ole-boys. Of course, using their awesome Martial Arts and survival skills, the twins proceed to turn the tables on their pursuers and the hunters become the DRAGON HUNT-ed, eh?

The Macs are back! Finally! The McNamaras upped their game for this sequel to the jewel that is Twin Dragon Encounter. The cast is bigger (and “better trained” according to Jake), more diverse, and with bigger action setpieces such as machine-gun shootouts, blow-ups and even an attempted helicopter explosion. Consistent with this expansion, the movie is also even more disjointed and insane than its predecessor, with nutty narration by B. Bob as Jake, including much singing. He does a rousing rendition of “The Teddy Bears Picnic” that really adds a lot to the soundtrack. 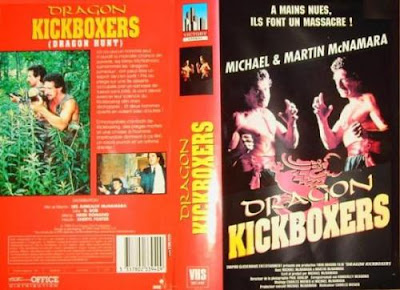 Speaking of the soundtrack, what would a sequel to Twin Dragon Encounter be without more catchy, rockin’ tunes by Billy Butt? Not only does he contribute a title song (with lyrics that reference happenings in the plot; we love when movies have those) but two new songs, “Survivor” and “Makes a Man Cry”. The song “Faces” from the first movie returns, but we think it’s an all-new re-recording.

The whole thing is wonderfully silly and you can’t help but enjoy it. It even gets AIP-esque at times, and while the movie was released in 1990, it has a copyright date of 1989 and surely has the ’89 spirit we’re constantly talking about. They really did a lot with their low budget and we respect that. The first credit we see after the last scene is, and we quote, “This Film Was In No Way Assisted by Telefilm Canada Or the Ontario Film Development Corporation”. So not only did they assert their true independence with the making of this movie, they went out of their way to give the finger to the powers that be! You don’t see that anymore, and it should be applauded and treasured.

However, the downside to that is that this is the lesser-seen of the two classic McNamara movies. It got no U.S. distribution on VHS because Vidmark passed. We’re really not sure why, seeing as they saw fit to release the first one, but maybe this was just too out there for them. Or maybe new management or something stupid like that. But it did come out on Cineplex Odeon Video in Canada, and a few French and German territories, but that’s about it (except for rare television screenings, but we’re talking about physical releases).

In many ways an improvement upon its predecessor, at the very least it’s just as good and worth seeing.

Reasonable people may differ on which is the better McMovie, but one thing is certain: all the charm remains intact in this sequel, and it’s best to just see them both.

I just found twin dragon encounter and this film on YouTube. I'm definitely going to check them out. This film sounds a little like surviving the game which I have not seen since it first came out. Now I have to look for that one too! Great review man .

Thanks for the kind words. Both McNamara movies are a lot of silly fun.

You may be interested in this if you haven't read it. They may not be done fighting for the right to fight. The article (and an interview with one of the McNamaras from Laser Blast Film Society) explains the origin of that seemingly silly lyric, among other things.

Thanks for the link! Appreciate it.