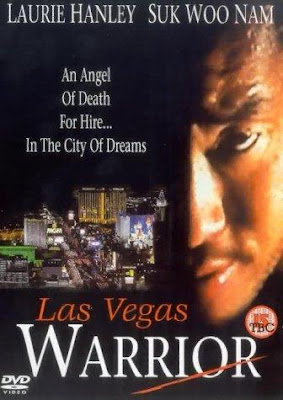 
Suk (Suk Woo Nam as himself?) was not named after this movie. Rather, he is the best fighter on the underground Punchfighting scene in “Vegas”. Whenever the corrupt bosses who run the fights need a win, they call in Suk. A reporter for a TV station named SVS (are we sure it’s not the CBC?) named Chase Somete – and because the audio quality of this movie is so bad, it sounds like everyone is calling her Jason X – brings along her cameraman, the lovable Andre (Simpson) and the prissy and annoying soundman Jimmy Olsen (presumably no relation to the Daily Planet reporter) (Wadden), and off the three of them go to initiate their investigative reportage about Suk. However, the three get more than they bargained for as they go deeper and deeper into the shady world of Punchfighting. With the help of a local fish salesman named Gill (get it?) (Amoroso), will Chase and her compadres get to the truth about Suk and the Las Vegas underground fight scene?

Las Vegas Warrior is a dreary outing that has about as much fun and excitement as an overcast Canadian winter. Just because a movie has the words “Las” and/or “Vegas” in the title, it does not necessarily mean said movie was shot there. It could be Canadian, for instance. To be fair, this also goes by the name Fightclub Warrior, although that title has its own problems. But why not call it “New Brunswick Warrior” or something like that and stay true to your Canadian roots? 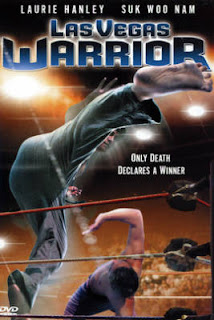 Anyway, this movie makes the similarly-themed The Circuit (2002) look like a masterpiece. In addition to the aforementioned poor sound quality, we also have equally dingy, video camera-esque picture quality. The whole thing is extremely low-rent and the rock-bottom budget is evident in every scene. Not that the latter is in itself a bad thing, but director Baron seemingly didn’t know how to use what she had to her advantage.

For example, most of the characters (except for the jovial Andre) are whiny. This includes our heroes Chase and Suk. For no reason whatsoever, there are these two-second flashes in between some random scenes. Maybe they thought they would liven things up or make it seem hip and cool. Irritating the already-tired eyes of the viewers is not cool, people. These unnecessary flashes were also used in The Circuit. Coincidence? Well, probably. But it’s not a good sign of confidence in the strength of your movie.


Plotwise, there’s no big, final villain. No one to build up to. No Matthias Hues, Ralf Moeller, or Wolf Larson for Suk to fight. Just…nobody. The soundtrack to all this is almost as whiny as the characters themselves. Early 2000’s-style crud-rock by bands called Dog Eat Dogma, Universal Freak, and Les Respectables pollute our ears the entire time. To be fair yet again, the other music on the soundtrack is credited to a Ferocious LeFonque. This may be a character on RuPaul’s Drag Race, but we’re too busy watching Las Vegas Warrior to know for sure.

In the end, the low budget of Las Vegas Warrior could have been transcended with a better script, more exciting and diverse fight scenes, and less amateurish technical qualities. Unfortunately, none of that happens, and the result is flat and dull.