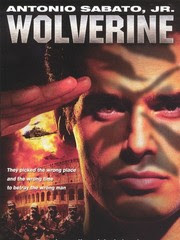 
Harry Gordini (Sabato Jr.), his wife Monica (Lind), and their nine-year-old son Joey (of course his name is Joey)(Cox) travel from L.A. to Rome for a little family vacation. Unfortunately, in the worst case of “mistaken suitcase” ever, some evil, drug-dealing baddies led by Adolfo Jones (Quinn) end up getting the Gordinis’ suitcase filled with Joey’s extensive collection of diving gear, while the innocent family gets a case filled with 200 million dollars’ worth of a new street drug. Jones really wants the suitcase back and is willing to go to any measures to get it. Meanwhile, Special Agent John Baines (Brooks) and the FBI/police are hot on the trail of the gang. Who will find the Gordini family first – the cops or the baddies?


However, before that question is even considered, it is revealed that Gordini is no mild-mannered college professor. He is a Navy Cross-decorated Navy SEAL with the code name Wolverine. He was dubbed that by his compatriots because he is “the best” and trained to be an ultimate killing machine who stubbornly refuses to give up stalking his prey. When Monica and Joey are kidnapped (and in the case of Joey, more than once!), the tables are turned – who will reach the baddies first, Gordini or Baines? And just when you’re figuring that one out, you realize that there are several more twists and turns to go! Will Adolfo Jones or Agent Baines bring out the worst – or possibly best – in the man known as WOLVERINE?


Wolverine is a watchable, competent, and coherent outing that is quite TV movie-esque, which makes sense, as this was a pilot for a potential series. It could have worked well in syndication. Unfortunately, it was made before the golden age of television – i.e., now – and our current proliferation of cable channels that could have housed it, complete with all the violence and nudity the writers could have wished for. So, yes, the violence is pretty tamped down; there is some shooting and some neck snaps that are more funny than brutal. But they managed to squeeze out as much action as they could under the extremely limiting circumstances.

To be honest, there isn’t a ton of action in Wolverine. What action there is, of course, is more than welcome. But it’s a pretty entertaining movie in its own right and the cast carries it off well. We’ve got Antonio Sabato Jr. on board, naturally, and he’s shown time and again he can be a heroic lead we can all get behind. Traci Lind as his wife makes a good match for him, and, plotwise, as we the viewers get to know more about her character, things start to make sense (no spoilers here).

There has to be a little kid named Joey, so one of those is here of course. He’s more interested in playing one of those zero-graphics hand-held video games from Tiger Electronics than seeing the amazing sights of Rome or, really, doing anything else. But then when he finally gets to go diving, well…we won’t say what happens, but let’s just say the baddies pull out their ultimate weapon.

Richard Brooks was another welcome face, as were some of the European actors, but it does seem hard to believe someone would go way out of their way to track down Wolverine. (Unlike in real life, where he would go way out of his way to track you down). If you see the DVD cheap somewhere, sure, pick it up, but don’t expect anything other than something decent. Just decent, that’s it. It’s not bad by any stretch, but it won’t blow you away, either.

Maybe if Wolverine was unchained from TV censorship, that might have happened. But as it is, it’s just good, no more, no less. Some 90’s tech on display and some people sounding like they’re calling our hero “Gordita” aren’t going to change that.