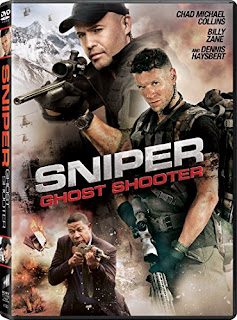 
Brandon Beckett (Collins) and Richard Miller (Zane) return yet again for another look through the reticule, this time tasked with protecting a gas pipeline in Turkey and Eastern Europe from terrorists. When Beckett mouths off to his superior officer, he’s sent to the high reaches of the Caucasus Mountains so he can go snipe in the snow. It’s there he links up with some local snipers who want to join the fight against the baddies. Meanwhile, Colonel (that’s all he’s credited as) (Haysbert) is running things from behind the scenes. Will the team all get along? Will they fight against one more evil sniper? Who will make it to the next sequel? Find out today…?


So here we are on the sixth and, as of this writing, penultimate film in the inexplicably lengthy Sniper film series. Honestly, we’re running out of things to say. We’re trying hard not to be repetitive. I mean, we’re trying hard not to be repetitive. But obviously we’re putting more effort into that endeavor than the makers of the Sniper series are. We’re now at Friday the 13th or Nightmare on Elm Street levels in the sequel sweepstakes. Who knew?


Sure, Ghost Shooter commits a couple of the seven deadly DTV sins we’re always railing against, such as the fact that there’s no one strong, central villain, there is an over-reliance on CGI, such as in the computerized blood, smoke, missiles and, in an especially ridiculous moment, a CGI helicopter, and there are many scenes in darkness where no lights are turned on or, evidently, even considered to be important.


The plot is weak and character development is nil. Chad Michael Collins is, you guessed it, still bland and faceless. All that being said, the movie isn’t a total trainwreck; Billy Zane, as usual, enlivens the proceedings, seemingly effortlessly. Dennis Haysbert’s presence is also not just welcome, but desperately needed to give life to what we’re seeing onscreen. Dominic Mafham isn’t in it that much but he adds something to the scenes he’s in. The locations are picturesque, and we get references to current events when our heroes fight ISIS. There’s even a nod to the old school with a couple of guard tower falls.

It should be noted that the main bone of contention as it relates to all the conflict and action is called the Gazsnab Pumping Station. A lot of people get shot over something with such a funny name.

Of course, there’s a lot of shooting and sniping action (with all the military jargon that would imply), but without any suspense or character development, it gets boring fast. Things would pick up a bit in the subsequent installment, but we tend to think there isn’t a lot of ammo left in the chamber.