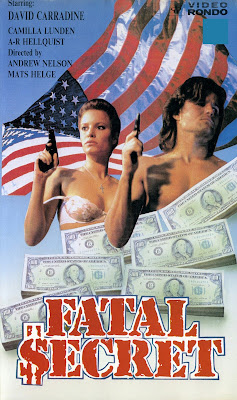 
As is usually the case, everyone is after “the disk”. Yes, yet another floppy disk containing top secret information is highly sought-after. The CIA, The KGB, and a nefarious drug dealer named Michael LeWinter (Carradine) all want the disk. Thankfully, a special agent of some sort named Kim Brown (Lunden) is on the case. Teaming up with John Mitchell (presumably not the British prog rock guitarist) (Hellquist), the two of them single-handedly embark on a mission to get the disk to the right people…but who are they? And can they be trusted? In the meantime, many battles ensue. Who will uncover the FATAL SECRET?


If you were to stop some random Americans on the street and ask them what they think of when they hear the word “Sweden”, you might get answers such as Abba, Ikea, a certain Chef from the Muppets, or perhaps you may get some mutterings about meatballs. The more informed among them may mention some sort of bikini team or something about death metal. What you won’t hear them say, sadly, is anything about the great Mats Helge or his contributions to Swedish cinema. To be fair, some of his works were exported to the U.S. and some weren’t, but the wider public at large should know that Swedish filmmaking doesn’t start and end with Ingmar Bergman. 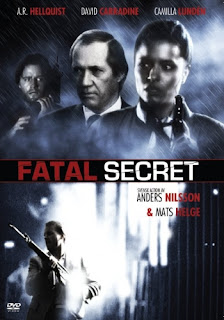 We’re constantly championing Helge’s work, and we’re not about to stop now. In Fatal Secret, the Helge stock company that appeared in his prior films all come back to shoot at each other one more time. There is a lot of gun-shooting in this particular outing, but the best scene involves a fight between Helge regular and Kurt Russell lookalike Hellquist and a really unfortunate dude in an attic with a bare lightbulb. You’ll know it when you see it.


David Carradine comes back as well, and while his triumph for Helge was Animal Protector, here he puts his usual screen presence into his relatively small role as the smooth yet shady LeWinter. Of course, the Kenny Rogers Guy – Frederick Offrein – is back too, because it couldn’t be a Helge movie without him. Interestingly, the actors weren’t the only collaborators that came back to work with him. Anders Nilsson, who worked behind the scenes for Helge in many different capacities over the years, was seemingly promoted and is credited as co-director here.

Once again, the film was done under the aegis of the SWEDISH ACTION FILM FORCE, which is the first credit we see on screen. Shortly thereafter, we see characters in a room with an American flag in the background looking at a briefcase filled with American dollars. Just how this squares with the Swedish Action Film Force is all part of the puzzling fun, as are the myriad accents just about everyone on screen speaks with (does Carradine have an American accent?)


But the important thing to know is that there’s a character named Angelo who looks like a malevolent Yakov Smirnoff. And, as in prior Helge outings, there’s a “greatest hits” during the end credits, so you can see all your favorite parts again. Not Jackie Chan-style outtakes, but sitcom-style replays of what you previously saw. He probably figured to get the most bang out of his buck that way. We’re certainly not complaining. Plus, the pumping 80’s music by Dough (Yes, Dough) Anderzon plays over it all, so if you’re really pressed for time, you can just skip to the end credits.

While we wouldn’t say to run right to this movie if you’ve never seen any of Mats Helge’s other works before, if you’ve seen and loved The Ninja Mission (1984), Russian Terminator (1989), or Animal Protector (1989), and want more, here is another great example of Mats doing what he does best.