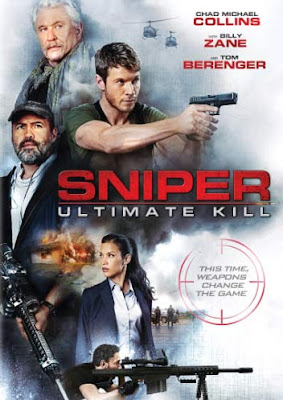 Our longtime friend Thomas Beckett (Berenger, of course) is now working for the DEA in Colombia. He’s down there because a drug lord named Jesus Morales (Juan Calero) is causing all sorts of havoc and mayhem by employing a sniper named El Diablo (Felipe Calero) to eliminate his enemies using the latest in high tech sniping technology. Beckett’s son Brandon (Collins), who is also an expert sniper (as you may remember if you’ve seen the latest spate of Sniper films) also travels to Colombia to try and take down Jesus Morales and El Diablo. Working with local agent Kate Estrada (Garcia) as well as John Samson (Lando), and, of course, Miller (Zane), will the power of everyone involved be enough to stop the sniper-on-sniper violence?

Here’s a question: why are there SEVEN Sniper movies to date? No, really. We demand answers. I want someone to explain to me why these stories need to be told over and over again. That, really is the main problem with this, the latest installment in the Sniper saga. It’s not a bad movie. It’s really not. It’s competently made, and delivers pretty much what you’d expect of a DTV Sniper movie from 2017. But that’s just it – I think it’s fair to say that this series has overstayed its welcome at this point, and even the movie at its best can’t overcome that.

While it was nice to see both Berenger and Zane back together, they mostly stayed in an office capacity while young sniper Brandon got in on the action. Not to tempt any filmmakers out there who may be considering a Sniper 8, but we had an idea for what this movie should’ve been. The evil sniper puts Brandon in the hospital, so Berenger and Zane have to go back into the field even though they’re getting on in years, to put their combined skills together to get revenge and show they’re still the ultimate snipers. Well, the offer is on the table. Get in touch if you’re interested.

While Brandon is called “the best”, and he still calls his own father “Master Guns”, the problem is that Chad Michael Collins is still bland and faceless. You don’t know what he looks like even when you’re looking right at him. That aside, we do get some “bullet time” for a new generation, and there is a good amount of violence and nudity – probably because the filmmakers have to compete with big-budget Hollywood product like Shooter (2007) and Sicario (2015). Sometimes it tries to be overly slick, but not as bad as some other DTV outings we’ve seen.

We assume there has to be an audience for this, otherwise they wouldn’t keep making them. We applaud fan favorites Berenger and Zane for still even wanting to be involved. While, as we said, the movie itself isn’t bad, we can’t really recommend it unless you’re a die-hard Sniper fan. We suspect there’s only so much sniping a human being can reasonably stand.