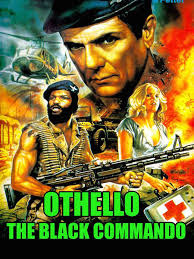 Now here’s Shakespeare as they should’ve taught it in school: with blow-ups, gun-shooting, bazookas firing, and at least one minor character screaming while shooting a machine gun! Just as “The Bard” intended, of course. During both dialogue scenes and action bits, many different Beethoven pieces blare on the soundtrack. The whole thing has an odd and stilted pace.

We’ve got to give actor/director/Shakespeare dialogue adapter Max H. Boulois a lot of credit here. While the whole outing might not be perfect, we give him a lot of points for at least trying something different and not serving up a Jungle/War Slog as are so often churned out (both then and now). With Boulois as Othello, Joanna Pettet as Desdemona, and in a masterstroke of casting, Tony Curtis as Iago, Othello: The Black Commando is an oddity that’s worth checking out.


Now, with all this talk of Shakespeare and Beethoven, you might be forgiven for thinking you’re watching something highbrow. That’s not exactly the case. It’s still a B-grade actioner from the 80’s; lead star Max Boulois looks (and acts?) like a precursor to the late Kimbo Slice; for some unexplained reason, only in the beginning of the film, he can read Desdemona’s thoughts; and a band at a house party plays an unauthorized cover of “Oye Como Va”. Over and over again. On top of that, Tony Curtis goes wild with his over-emoting, Bronx-accented Shakespeare. Again, just as intended in the 1600’s. 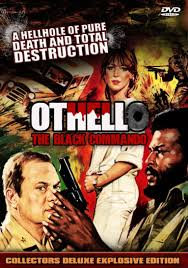 While Othello: The Black Commando never broke into a wide audience and remains pretty under the radar (at least in the U.S., despite a VHS release), the cast as a whole has a noteworthy Euro-cult pedigree.

Because the film was shot in large part in Spain, Euro-Western stars Fernando Sancho and Aldo Sambrell make appearances, as does Nadiuska, who appeared in Leon Klimovsky’s The People Who Own The Dark (1976), among other genre items. Ramiro Oliveros, who plays Cassius, was in The Pyjama Girl Case (1978) and Cross Of the Devil (1975). Gerard Barray, who plays Stafford, appeared in The Twilight Girls (1957), just one of many genre titles in his long career.

But because Othello: The Black Commando happens to not be a giallo, but a crazy action/Shakespearean mash-up, it’s not likely to see a Blu-Ray release anytime soon. It’s never namechecked by the well-known writers on Euro-Cult cinema.

To wrap things up, Othello: The Black Commando isn’t like most action films of its ilk. And it’s certainly unlike any Shakespeare adaptations we’ve ever seen.

But it’s from the greatest decade ever, the 80’s of course, and that golden era is still serving up surprises to this day. We’re more than willing to overlook any minor technical flaws and amateurish moves in order to celebrate that. So, with a gesture with our palms in the air in a quizzical expression of “what the…?” we do indeed celebrate this odd duck of a movie.