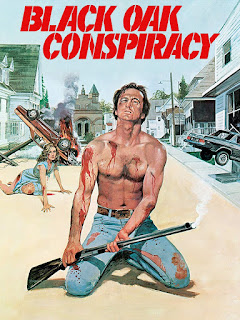 Ralph “Jingo” Johnson (Vint) is a hard-working stuntman trying to make his way in the tough world of low-budget action movies. When he goes back to his hometown of Black Oak, California (not Arkansas as you might think) to visit his ailing mother, he discovers some mysterious doin’s are afoot that can only be described as a BLACK OAK CONSPIRACY.

An unscrupulous father-son team of mining bosses named Bryan and Harrison Hancock (Fowley and Lyons, respectively) are buying up all the land in town, and the corrupt Sheriff Grimes (Salmi) is backing them all the way. When they knock down Jingo’s beloved family home, he starts on the trail of unraveling – and putting an end to – the BOC. Not Blue Oyster Cult, but the Black Oak Conspiracy, of course. Jingo gets plenty of help from his buddy Homer Metcalf (Cassel), but he’s also trying to win back his lost love Lucy (Carlson), who has been stolen away by the nefarious Harrison. Will Jingo Johnson be the hero that saves Black Oak? Find out today…


We really enjoyed Black Oak Conspiracy. It exudes that wonderful 1977 atmosphere, and you can imagine people pulling into their local drive-in, putting that speaker on their window, and watching it. Clearly it was influenced by previous so-called “good ole boy” movies such as White Lightning (1973), Gator (1976), Walking Tall (1973), and Fighting Mad (1976), among many others. However, it pre-dated The Dukes of Hazzard by a couple years. This sort of plot and style was popular throughout the 70’s, and BOC is a prime example. 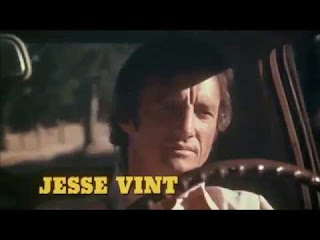 Jesse Vint makes a likable hero and you really grow to love Jingo Johnson. Vint is also credited here with story and production, and the working title of the film was Jingo, so clearly this was Vint’s moment and he created a memorable, relatable hero. He’s not the sort of unkillable superman that appeared in movies later on, he’s just a down-home dude the audience warms to. Seymour Cassel is perfectly mellow and understated as his sidekick, and Salmi and Lyons as the baddies are the perfect 70’s small-town villains. The whole cast should be commended for a fine job all around.


Perhaps one of the most noteworthy and attractive things about Black Oak Conspiracy is the pure Americana on display. Local waitress Melba Barnes (Blythe) works at a small café called the Midget Kitchen (which I don’t think is a restaurant name that would exist today) and is going out with lovable lunkhead Billie Bob (Foster). 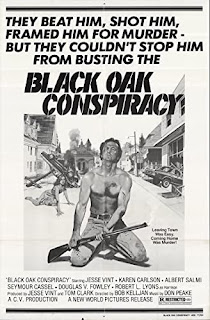 The whole town attends the dance at the community center, and it’s not just a country band that plays, but it’s more like a talent show. The movie takes the time to show some of the talent on display, including a group of girls in an all-kazoo band buzzing through patriotic songs and, of course, the showstopper: a full – and we mean full – rendition of “Old MacDonald Had a Farm” by a lady who sucks in a bag of helium first. To see this nostalgic look at a time gone past not only sets BOC apart from its competitors, it also gives greater weight to some of the violence we see later on.


What’s needed in today’s times of overblown, trillion-dollar blockbusters are more unpretentious outings like this. Featuring some standout cinematography (especially during the climax in the mine pit), have a good ole time with Black Oak Conspiracy. You’ll be glad you did.

Sounds like a familiar plot but a decent action piece.

Great review and great movie. I was just hoping for an awesome car chase and stunt work at the end. other than that I really enjoyed this movie. The potato in the pipe in the end was pretty funny.

Buddybaba: You're correct, definitely worth checking out, it's on Amazon Prime now.

Joseph: Thanks! Appreciate the kind words, We agree it's very enjoyable.