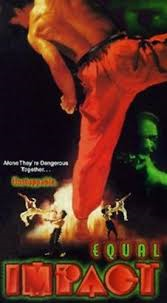 Dave Conner (Joe Gates) and Josh Conner (Jay Gates) are twin brothers who also just happen to both be Tae Kwon Do experts. During their latest Martial Arts competition, they run afoul of evil Tae Kwon Do man Bobby Souk (Geriene). Souk may be a malevolent mulleted muttonhead, but he’s the least of the Conner brothers’ problems. It turns out that criminal mastermind Donald Moss (Estevez) is using Souk’s dojo as cover for his counterfeit ring.

After a brawl in an alley with the Moss gang, Josh Conner takes some of the counterfeit money from one of the baddies. Now Moss is hoppin’ mad so he kidnaps not just Dave Conner (come to think of it, isn’t he a character on Roseanne?) but also Josh’s new love interest – and potential Bobby Souk bride – Alison (Nikka Bailey). Just when all seems hopeless, help arrives in the form of the mysterious and taciturn Ray Tobin (Z’Dar). Will our unlikely allies, as well as the baddies, both put forth an EQUAL IMPACT? And who will come out victorious?

We know we say this a lot, but where are the McNamara brothers when you really need them? Just when you thought the stars of Twin Dragon Encounter (1986) and Dragon Hunt (1990) had cornered the market on low-budget, twin-based kicking and punching, along come the Gates brothers. They seem downright plain by comparison. Even their names, Joe and Jay, seem lackluster. That being said, we’ll do our best to get over our pro-McNamara bias and try to be objective here.

As far as the quality level, try to imagine a cross between Radical Jack (2000) and Warrior Of Justice (1995). Some people may call it amateurish just because its budget is low and it isn’t structured very well. These same people might note that the lighting, sound, and acting are also not the best. But we choose to point out that there is entertainment value to be had with Equal Impact. There are some definite “laffs” along the way.

For example, not only does the movie feature the aforementioned twin brothers, but the baddie looks exactly like them. Why they cast yet another skinny Tae Kwon Do nerd who looks exactly like the supposed heroes is inexplicable. Add to that the poor lighting and the viewer quickly is seeing triple. They could have called the movie Triple Impact but that title was already taken. And yes, apparently there is such a thing as a Tae Kwon Do nerd. If you’ve never seen one, watch Equal Impact. You’ll soon see three. And you can’t even tell who’s who by their voices, because all of them have soft, reedy, non-intimidating pipes that wouldn’t even cause a mouse to flee away from them.

Naturally, the whole thing ends with a classic Final Warehouse Fight, and earlier on in the proceedings we get to witness one of the silliest barfights we’ve seen in years. They should really give out awards for these things. Maybe we could do it and call them “The Actionies”. Equal Impact could at least be nominated in many categories, and very well could win “Silliest Barfight”.

Of course, Joe Estevez and Robert Z’Dar are on hand as well. Hey, a job’s a job, and these guys clearly like to work. They seem not to be influenced by how small a film production may be. I guess if the price is right, they’ll appear. We’re happy they’re here, because they raise the interest level pretty considerably. Even though Z’Dar does more smoking and drinking than talking this time around, we remain big Z’Dar fans and will watch the movies he’s in with as little prejudice as he has when choosing his roles.

Because it was the 90’s, the whole thing ends with a wussy song. Gone were the days of driving AOR anthems to pump you up on the soundtrack. That was a strike against the movie, but the biggest problem with Equal Impact is its 108-minute running time. Why, why, WHY is this movie so long? Even glossy Hollywood blockbusters often fail to justify a movie with that length. What hope does Equal Impact have? What were they thinking? Because it has a bunch of funny/entertaining moments, if it was trimmed down to 80 minutes, we would be looking at a gem. As it is, it’s pretty overlong.


It should also be noted that, according to the credits, Flight Choreography is by a man named Edgar Bailey. Let’s put it this way: The Blue Angels are nowhere in sight. Nor is any aircraft. We’re pretty sure they simply misspelled the word “Fight”. Not a good sign for an action movie.

As stated earlier, Equal Impact does contain some entertainment value, but it should have been shorter. It was also in dire need of some Steven Nijjar. But, then again, what movie isn’t?

I think this movie would have been better with more Robert Zdar action. Was looking forward to see him do some baddie ass kicking at the end. I also didn't like how the bad guys just stood there waiting to get hit. When some scenes kind of draged on Robert Zdar and Joe Estevez got me interested again. In my opinion without them two this movie wouldn't be watchable. And that horrible bar fight. What the hell? Great review as always guys!

Thanks for the kind words! Totally agree, it needed more Z'Dar action. Thank goodness for Joe Estevez and Z'Dar.