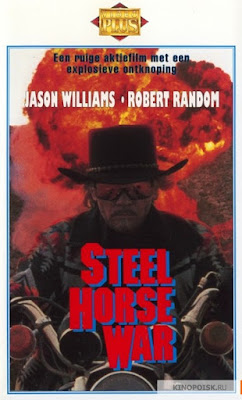 Reaper (Random) is an evil outlaw biker who is assembling an army of his fellow “bikies” (as they’re called in Australia, we believe) in a trek around the deserts of Trona, California.

It seems there is a cache of buried gold that was put there by some confederate soldiers back during the Civil War, and Reaper is out to find it. He wants to use the gold to fund an all-biker city where he is king. He’s causing murder and mayhem along the way, but he’s finally met his match in Wade Olsen (Williams), a former cop and “good” biker who wants to end Reaper’s reign of terror. Teaming up with man of mysticism Rainmaker (Subkoski) and female bike-ette Skin (Ranney), Olsen is hot on Reaper’s trail as he and his biker buddies harass models on a photo shoot, female student archaeologists, and other hapless victims. Who will come out victorious in the STEEL HORSE WAR?

We’ve been trying to figure out why the movie The Danger Zone (1987) has not one, but TWO sequels. Our guess: The late 80’s and early 90’s were a boom time for video stores and DTV, and evidently customers hungered for more of their favorite characters. Which, in this case of course, are Wade Olsen (spelled as Olson in the prior two Danger Zone movies, for those keeping track of Danger Zone minutiae at home), Reaper, and Skin, who appeared in the other outings.


This installment in the trilogy features plenty of pudgy and/or overweight bikers. Tattoos, whippings, and a classic prison transport gone wrong (do they ever go right?) are also on show, as is one of the most brain-cell-depleting fights we’ve seen in some time (the one at the gas station). Wade Olson even has his own “Q” in the style of James Bond, a guy that gives him a panoply of nifty gadgets he can use in his biker war. We appreciated that sort of ingenuity. 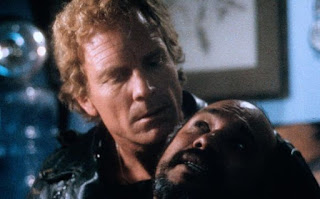 The three Danger Zone movies were each directed by a different person. Intriguingly, for each of the three men (Henry Vernon, Geoffrey Bowers, and Douglas Bronco, respectively) their go in the director’s chair for their Danger Zone movie was their one and only credit. Literally nothing else exists for any of the three men. No acting credits, no second unit, no best boy grip, nothing. Just Danger Zone for all three. It’s one of the mysteries of life, I tell ya.


What Bronco did for his turn was give the whole thing a wraparound where an elementary school kid is reading a comic book called Steel Horse War that is the action of the movie, almost in a Creepshow (1982) style. A lot of the goings-on are a bit violent to be in a kids’ comic book (though there is no real nudity, it gets close). The little kid gets to see a “white power camp” that we know is a “white power camp” because the words “white power camp” are spray-painted on a bedsheet. Pretty intimidating stuff, especially for a young tot.


For the most part, it’s all done pretty competently (with the possible exception of the dubbing, which adds an amusing layer for the viewers all on its own). You probably won’t be bored, and it’s entertaining enough. Danger Zone III: Steel Horse War is perfectly fine for what it is, but it must be said that we missed The Skirts.

Comeuppance Review by: Brett and Ty
Posted by Ty at 1.7.20