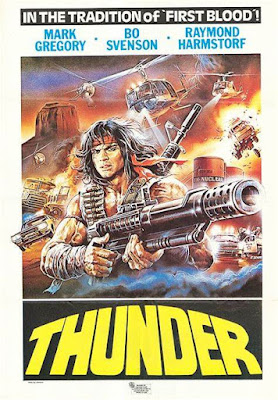 "Thunder will never die!!!"-Kid Running Away

Thunder (Gregory) is a mild-mannered Native American minding his own business and just trying to live his life in Page, Arizona. That is, until a crew of construction workers attempt to bulldoze an ancient Navajo burial site. He goes to the local police station, but Sheriff Bill Cook (Svenson) is no help, and his crew of angry, racist deputies, led by Barry Henson (Harmstorf) only seem to want to harass and torment Thunder.

After yet another gang of redneck attackers assaults Thunder, he finally snaps – into action, that is. Armed with a bow and arrow, a bazooka, and several bits of stolen construction equipment, Thunder gets in touch with his warrior roots and goes to war with the entire town! Luckily, on his side is the local DJ, who sends out encouraging messages, and a reporter named Brian Sherman (Malco) also gets behind Thunder’s mission. What will be left in the wreckage after THUNDER rolls in?


Here we have the first entry in the Thunder trilogy, all of which are directed by Fabrizio De Angelis (as Larry Ludman of course), and starring Mark Gregory, AKA Marco Di Gregorio. As has been noted before, Thunder is very closely modeled after First Blood (1982), down to the veritable re-creation of certain scenes. That doesn’t detract from its appeal, however. In fact, it only adds to it. Thunder boasts some fantastic location scenery, fights, car chases, and blow-ups. It’s all set to a typically-great Francesco De Masi score and has some familiar B-Movie names we all know and love (though, to be fair, there should have been just a bit more Bo Svenson).

We really don’t want to repeat what we said in our reviews for the other Thunder movies, especially part two, because much of that could apply here as well. A lot of the same stuff happens in all three movies in the trilogy. For example, the local redneck population call Thunder a barrage of racial slurs, including “redskin” many, many times. The fact that Thunder is played by Marco Di Gregorio, who was born in Rome and is about as Native American as Pope John Paul II, is very amusing. 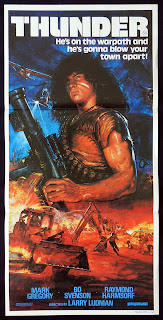 The grandfather in the Thunder family steals the movie, or maybe it’s just his dubbing. But we really enjoyed every scene this elderly gentleman was in, and the final third is a satisfying destruction spree you can’t help but love. If you really do love it, you can watch it two more times in the sequels. Everything catches fire (literally) when Thunder hits his Breaking Point – not unlike Bo Svenson himself in the 1976 film of that name.


Thunder is B-Movie action fun as only the Italians can serve it up. It was perfect for the video stores of the day (even if, let’s be fair, the minimal plot of the deputies chasing Thunder for almost the entire running time does wear a bit thin after a while). But it all ends on an encouraging note with a memorable final line. As an example of classic Rambosploitation, it’s hard to do much better than Thunder.

Comeuppance Review by: Ty and Brett
Posted by Ty at 8.7.20

Great movie and the best in the trilogy.